A YES RECORD WITH ALL THE NECESSARY DRAMA 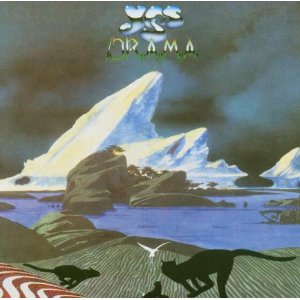 The Drama album was my introduction to Yes. Oh sure, I’d heard the seventies FM radio cuts, but never was a huge fan until Michael D. got me listening to this album in college.


For many years, it stood as the only album in Yes' career that did not feature lead singer Jon Anderson, and after Jon rejoined, Yes did not perform any of the songs from Drama, as Jon refused to sing them (although Anderson would sing the token words "yes, yes" during the instrumental portion of "Tempus Fugit", included in Squire's "Whitefish" medley).

After the lackluster Tormato failed to live up to expectations and Jon Anderson and Rick Wakeman left the band, Yes made the unlikely move of adding singer Trevor Horn and keyboardist Geoff Downes from the two-man new wave band the Buggles (of "Video Killed the Radio Star" fame) for this 1980 album. The result was a modern sound that still carried all of the Yes trademarks, and the high points far outshine the lows.

Despite how some Yes fans feel about this album, Drama is a brilliant effort that rocks heavier than any other Yes album. Horn makes an attempt at Anderson's vocal style (though he strains at the high notes) and contributes his excellent production skills, with Downes adding keyboard wizardry. Their new-wave sensibility and dash of pop in the mix set the stage for the impending "90125" success.