Now in his fifth decade in the music business, Jonathan Edwards shows no sign of slowing down. With a new album set to release this Tuesday (June 14), I was already looking forward to next week. Those of you who remember such things will remember that Mr. Edwards' debut CD made my list of desert island discs AND my list of best debut albums. My Love Will Keep (Appleseed Recordings), is Jonathan's first studio CD in 14 years. 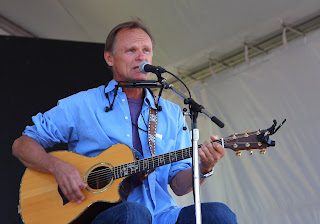 Now, can you imagine my surprise when I popped onto Jonathan's website and found that he was doing a show in Phoenix AZ next Wednesday?

Needless to say, I got my grubby hands on some tickets (bargain price-$25, a little coffeehouse for a venue).


I have not seen him live for almost two decades, the last time in Portland, Maine in 1993. If you have never seen him live, let me tell you, the man simply delivers. Songs of passion, songs of insight, songs of humor, all rendered in that pure and powerful tenor which, like fine wine, has only grown sweeter with age.

His signature hit, "Sunshine," almost did not make it onto his debut album. That song ushered in an era of celebrity in Jonathan’s life and career, sweeping him up in a current of “overnight” success. As Jonathan recalls decades later, “All of a sudden I was a huge celeb for fifteen minutes and riding around in limos … and I was trying my best, trying really hard to keep it at bay."

Following the success of “Sunshine,” Jonathan sought a haven from the probing spotlights and the demands of the road. The seemingly endless grind of touring took its toll, and a life-threatening illness served to bring everything sharply into focus.

While recovering, he decided to abandon his career and relocate to a farm he’d bought in Nova Scotia. “The illness straightened me out about my priorities regarding life."

Fortunately, Jonathan figured out a way to balance career and life, got back into the music business and continues to record and tour. He has amassed a catalog of sixteen albums (counting the new one), and is still a vital and relevant artist in today’s folk and Americana scenes, continuing the journey that has brought him to towns and theaters all over the globe.

Jonathan is much more likely to be found looking forward rather than back, and he continues to make good on that promise he made all the way back in 1971:

“Sunshine, come on back another day … I promise you I’ll still be singing.”