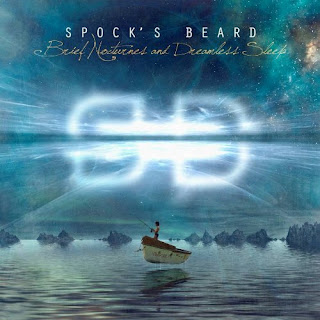 The Beard is back! Yep, that's right, with the departure of Nick D'Virgilio, we are presented with the third incarnation of the band. Have no fear, though as D'Virgilio is replaced by a pair of familiar faces.

Joining the band on a permanent basis is their previous touring drummer Jimmy Keegan and new to the band is former lead singer of Enchant, Ted Leonard.

Rounding out the band is the core of Dave Meros on bass, Alan Morse on guitar and Ryo Okumoto on keyboards.

After Neal Morse left the band in 2002, the next three releasess were somewhat darker albums, with 2010’s X being noticeably lighter and proggier.

Brief Nocturnes and Endless Sleep continues that trend, the movement back towards the type of music and energy that gave the band its reputation in the first place.

In what is a bold move for a band with twenty years under their belt, Ted Leonard gets a fair amount of writing credit on this disc, and Keegan’s drums are mixed to provide a new found energy, the cohesiveness with Dave Meros as a rhythm section showing after years of playing together live.

Ted Leonard had to follow two of the better known singers on the modern progressive scene, but he quickly makes his mark on the band’s sound, as is evident on “Submerged.”

Lifted from Leonard’s solo album, it becomes the best ballad the Beard has ever done.

The album has all the prog that you could want, tight rhythms, obscure lines, rolling bass lines, Mellotron, keyboards all over the place and catchy choruses.

The solos features great tradeoffs between Ryo Okumoto and Alan Morse, and the songs co-written with the aforementioned Neal Morse bridge the band’s different incarnations together.

Neal Morse's contributions are strong, but meld beautifully with Leonard's writing style, each song great in their own right.

Don't miss this one-truly, the Beard is back, and better than ever.

WAITING FOR ME (live)