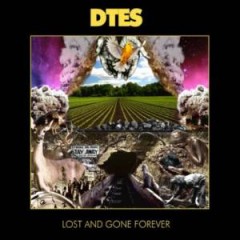 Lexington, Kentucky is probably not the first place you think of when looking for a band that embraces the progressive rock genre, yet Dream The Electric Sleep have clearly done that on their debut album, Lost And Gone Forever.

The album, one of the more impressive debuts I’ve heard in a while, clearly pays tribute to the seventies giants, but also tips its hat to more current artists like Radiohead. Two years in the making, this collection of fourteen songs spans more than 75 minutes, with a sonic pallet of melodic crescendo that engages the listener despite averaging well beyond six minutes per song, with every note seemingly in the right place as DTES guide the listener through progressive soundscapes that beg to be listened to from start to finish.

From the songwriting to the the crisp production, this is an album to be savored, a listening experience that should be actively participated, even immersed in, rather than being presented as background music.

The music is beautiful and astonishing with a precise attention to detail without needless technical wizardry, painting a cohesive picture with melodies layered on top of each other emoting varying moods and atmospheres while remaining faithful to the Genesis/Rush/Pink Floyd glory days.

While the golden years of progressive rock are long behind us, sometimes a band comes up with an album so impressive and full of musical integrity and quality of composition that it reminds us all there is more to music than a three-minuteTaylor Swift ditty.

To those who say that progressive rock has reached the end of its road, it appears that DTES have given those of us with time on our hands a record worth donning headphones for.