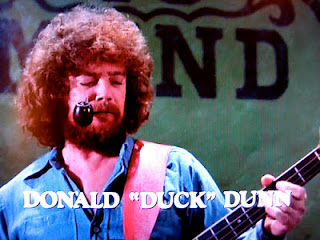 Donald "Duck" Dunn, the bassist who helped create the gritty Memphis soul sound at Stax Records in the 1960s as part of the legendary group Booker T. and the MGs and contributed to such classics as "In the Midnight Hour," ''Hold On, I'm Coming" and "Sitting on the Dock of the Bay," died Sunday at 70.


Dunn, whose legacy as one of the most respected session musicians in the business also included work with John Belushi and Dan Aykroyd's Blues Brothers as well as with Levon Helm, Eric Clapton, Neil Young and Bob Dylan, died while on tour in Tokyo.

News of his death was posted on the Facebook site of his friend and fellow musician Steve Cropper, who was on the same tour. Cropper said Dunn died in his sleep.

Dunn was born in Memphis, Tenn., in 1941, and according to the biography on his official website, was nicknamed for the cartoon character by his father. His father, a candy maker, did not want him to be a musician.

"He thought I would become a drug addict and die. Most parents in those days thought music was a pastime, something you did as a hobby, not a profession," Dunn said.

But by the time Dunn was in high school, he was in a band with Cropper.

Cropper left to become a session player at Stax, the Memphis record company that would become known for its soul recordings and artists such as Otis Redding, Sam and Dave, Isaac Hayes and the Staples Singers.

It was one of the first racially integrated soul groups, with two whites (Dunn on bass and Cropper on guitar) and two blacks (Booker T. Jones on organ and Al Jackson on drums), and was later inducted into the Rock and Roll Hall of Fame.

The group had its heyday in the 1960s as backup for various Stax artists. Dunn played on Redding's "Respect" and "Sitting on the Dock of the Bay," Sam and Dave's "Hold On, I'm Coming" and Wilson Pickett's "In the Midnight Hour."

Booker T. and the MGs had its own hits as well, including "Hang 'Em High," ''Soul-Limbo" and, before Dunn joined the band, the cool 1962 instrumental "Green Onions."

"I would have liked to have been on the road more, but the record company wanted us in the studio. Man, we were recording almost a hit a day for a while there," Dunn said.

In the 1970s, the group's members drifted apart.  Cropper and Dunn reunited when they joined Aykroyd and Belushi's Blues Brothers band. "How could anybody not want to work with John and Dan? I was really kind of hesitant to do that show, but my wife talked me into it," Dunn said in a 2007 interview with Vintage Guitar magazine, "and other than Booker's band, that's the most fun band I've ever been in."

Dunn also did session work on recordings by Clapton, Young, Dylan, Rod Stewart, Stevie Nicks and Tom Petty, according to his discography.

He is survived by his wife, June; a son, Jeff; and a grandchild, Michael, said Michael Leahy, Dunn's agent.