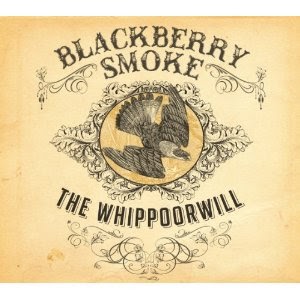 Based in Atlanta, GA, this country/southern rock band have performed throughout the United States as headliner and as supporting act for artists such as ZZ Top & Lynyrd Skynyrd, and their most recent album was released on Zac Brown's Southern Ground label.

2012's The Whippoorwill is the best album yet from Blackberry Smoke, the best southern rock band out there today. I can hear influences of The Band throughout this album, and the band echoes the glory days of Skynyrd, Blackfoot and Molly Hatchet with a pinch of outlaw country (which I would not be able to identify without the persistence of one Stephen T. McCarthy).

On The Whippoorwill, Blackberry Smoke deftly bridges the gap between the southerns style rock of today and that of the late sixties and early seventies. Southern rock fans have been waiting for a band like this to come along for a long time.


This album has it all - from rock to to jam band and most everything in between. When they lean country, it is not so far that you feel like selling a pickup truck because your girl left you, and when they wear their influences on their musical sleeve, the album is brilliant-there is not one tune I skipped on my first several listens.
Top to bottom this is one of the best albums I have purchased this year. The lyrics show depth and reflect real life experience, and the music is written with soul and passion and performed with stellar musicianship.
Simply put-this album sounds more like Skynyrd than Skynyrd's new album!
ONE HORSE TOWN
SIX WAYS TO SUNDAY
LEAVE A SCAR