If ever a decade changed everything, it was the ‘60s. The music, the mood, the attitudes … the whole era made such an earthquake-like impact, we still feel its reverberations.


Some still are inspired by it.


In recent decades, groups ranging from Blondie to the Bangles have tapped elements of the 1960s’ “girl group” sound, combining it with assorted modern touches.


One Austin trio have built a groove rooted in that rich time, but don’t think “nostalgia act.” 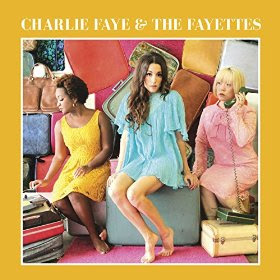 Both onstage and on their self-titled release, Charlie Faye and the Fayettes craft smart soul-pop that merges the swinging, swaying sound and style of ‘60s girl groups with a modern vibe that’s so current, they’re dancing to the forefront of a retro revival.


With the Fayettes, leader Charlie Faye has found the sonic sweet spot to demonstrate her love of the likes of the Shirelles and the Ronettes with 11 tracks that marry beguiling lyrics with incredibly catchy melodies, paying homage to Phil Spector’s Wall of Sound.
Delivering upbeat Motown-spiced '60s pop, this is the sort of ear candy that produced hits for the Shangri-Las and the Mermaids.


Faye authored or coauthored all of the album’s teen-dream songs, which are concise (most clock in at two-and-a-half to three minutes), well hooked, and loaded with lines about “cruel hearts,” “playing hard to get to get,” “sweet little messages,” and the like. The vocal harmonies are excellent and employ everything from glockenspiels to saxes to deliver a rich, radio-ready sound.


Album opener “Green Light” could serve as an answer song to the Supremes’ “Stop! In the Name of Love.”


"You’ve got the green light, baby


Why are we taking things so slow?”


Launched on Pledge Music, pledgers got the album in early March. The rest of the world had to wait until June 10.