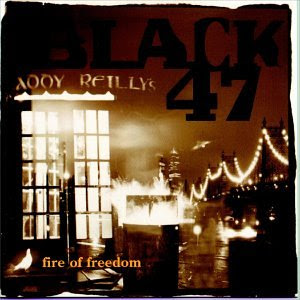 Neither Flogging Molly nor Dropkick Murphy’s are new bands, but many of their fans don’t realize that these two bands borrow heavily from The Tossers and The Mahones.

I’m here to let you know that Black 47 was doing the whole punk-Celtic rock thing before any of them.

This Irish-American band’s name invokes the Great Famine that killed one million Irish people and forced a million more to emigrate between 1845 and 1852.

Don’t get me wrong-Black 47 owes their sound to The Pogues who started in the early 80’s.

They also owe more to that band, as they were discovered and signed by Pogues manager Frank Murray.

The band went into the studio in 1993 with Ric Ocasek producing, and recorded Fire Of Freedom, an album that still holds up today.

From the first notes the album pulsates with Celtic flavor and energy. The portraits that emerge from this powerful and evocative album are of wounded people who are part Irish and part American, and yet are not wholly at home in either country.

Many songs on the album tell stories of an Irish-American protagonist having a great deal to drink and then behaving in a socially unproductive manner.

Musically, the songs benefit from the hip-hop quality of Kirwan’s vocal delivery, and from the melodic saxophone and trombone riffs that predominate throughout.

The album’s common theme (people of two countries who feel like strangers in both) almost creates a concept album about the modern Irish and Irish-American experience.

While the band created a lot of fine records prior to their break up in 2014 (25 years to the day after their first gig),  Fire of Freedom  is still the band's best work.