INTO THE ARENA AGAIN

ARENA: THE SEVENTH DEGREE OF SEPARATION 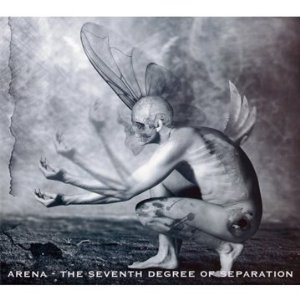 Arena's seventh album explores the last hour of life and the first hour beyond, a concept album about the gradual separation of the soul from its body and the soul's journey between life and death before it reaches the final revelation. The lyrics are, as before, written by the keyboard-master Nolan and are quite dark, but with a positive spin in the end.

The music fits the concept perfectly, with a dark atmosphere, at times melancholic, but through the whole album outstandingly epic. John Mitchell delivers some of the best guitar solos of his career and once again, Clive Nolan confirms his mastery of keyboards. New singer Paul Manzi is a solid replacement for the departed Rob Sowden. It is very difficult to choose the album's highlights, as there are many.

Many of the reviews I've read knocked the album for not being "progressive" enough, and this is certainly an album which will divide their fan base. People looking for epic-length songs may be disappointed, but they should remember the album that flows nicely from track to track, maintaining a consistent atmosphere through a baker's dozen "normal" length songs that all revolve around the cenral theme - certainly a progressive idea, although the music is far more comercially accessible than previous efforts.

This is a thoroughly enjoyable album from start to finish - the music is amazing, and each musician brings something to the table and is at the top of their game.