I WANT YOU BACK (NO, NOT THAT ONE)

I lived in South Jersey (near Camden, outside of Philly) from 1989 through 1993, and shortly after my move found Compact Disc World in Marlton.

Although a smaller retail footprint, their selection was better than Tower Records, and they played a lot of cool stuff in the store. I was there every Saturday.

Which was how I heard of the band Cry Charity’s lone album, “Peace Love Humiliation.” 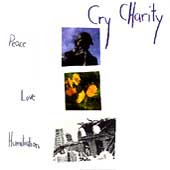 CDW had it playing in the store, I loved a couple of the songs, and snapped it up.

Cry Charity put together a solid album and while the genre does not make it into my player that often these days, I still love Tracy Bartelle’s voice.

All in all, it was a remarkably polished work, and had it been given even a half-decent promotional effort, this album might well have been a major seller.

Unfortunately, the label folded just weeks after Peace Love Humiliation was released, throwing the band into legal limbo and killing any hope for the album's success. Cry Charity never recorded anything again, although Bartelle issued a couple of digital albums during the last decade.

No You Tube for these guys, so I hope this file I created works...

Vault keyholders know where to go for the rest of the album...not sure it this can be found on download sites, but there were used copies to be had on Amazon..