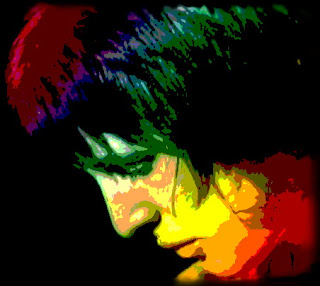 For the second straight Labor Day weekend, downtown Akron, Ohio suffered an invasion of Todd Rundgren fanatics, swarming into the Akron City Centre hotel and mobbing the hotel meeting rooms and bars until the wee hours of the morning, returning a few hours later to overdose on coffee to try to get their hearts started.
Saturday was the Rundrgen Radio birthday party, celebrating the three years of the blog talk radio program that has allowed the Rundgren fan network to stay connected to each other and the man himself.
Coming from Arizona, it took me most of the day to get there, but once again I found the entire hotel staff to be in the spirit of things, wearing specially designed Todd shirts (that some fans were literally buying off of the staffs’ backs for upwards of fifty bucks). The party was in full swing when I got there, with the three mammoth birthday cakes being cut as I walked in (if they sang Happy Birthday to Doug and Mel I missed it). 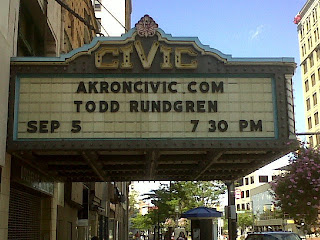 I’d brought along a Todd jacket that I’d purchased sometime during the year that did not fit (too much cake last year, I guess), but that the fine folks at Café Press told me to give to another fan when they refunded my purchase price.

Give it a fan I did-I ran into Corky almost immediately, who had been kind enough to front me a Diet Coke last year at the Kasim performance (I was jonesing for caffeine), and it looked like a good fit, so the jacket found a home!

I immediately took up the spare room in my suitcase with tee shirts from the various merchandise tables. Todd’s table was run by his son so I felt that two tee shirts, the live CD box and a DVD pre-order were the least I could do to help with his college costs. I also met Bill Bricker, a fan who I’ve known by name for the better part of three decades but have not had occasion to meet before.


The Kasim show on Sunday afternoon was similar to last year’s in style and setlist. Kasim is a great performer, and it is easy to see why he has had so much success as a sideman for Meat Loaf and Joan Jett (among others). Oh, and let’s not forget the thirty-some years on and off with that Rundgren feller… 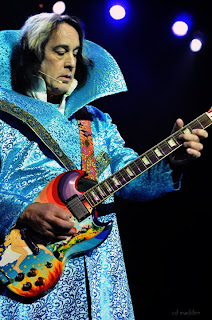 And the main event…the band started with “Todd” and played it through until “Don’t You Ever Learn” before breaking. The stage production was not as elaborate as last year, but I think that the music came off a lot better.

The album is simply more accessible than AWATS, with less “what was he on” moments in the mix. Surprisingly, the music holds up, except for some of the synthesizer parts, which while they must have seemed revolutionary in 1973 can be programmed by a pre-schooler today.

“In And Out Of The Chakras We Go” was skipped (the album version was played after the curtain went down for the night) while “Sons Of 1984” was saved for the finale.


“Healing” would have been my album choice last year, since Todd never really did tour it, although I wondered how the second side “Healing” suite would come off live. After a half hour intermission, the band came out in different costumes. Opening with “Healer,” the band was flanked by a local choral group who reproduced Todd’s layered background vocals from the record. The group made several trips to the stage, and their use is the production was extremely creative. 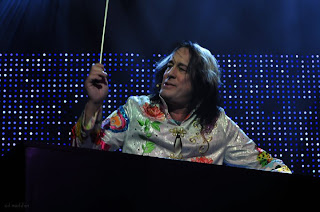 After running through side one of the album, and “Tiny Demons,” the b-side of a single packaged with the original album, the band launched into the second side of the album, a twenty-minute progressive piece about the healing power of music.
This piece was Rundgren’s most creative of the night, as he blended the musicians and the choir to produce a performance that (in my opinion) was far superior to the album.
Next up was “Time Heals,” the a-side of the aforementioned single, with a claim of fame of being either the second or the eighth video played on MTV (depending on who you read).
Then a brief break, and the band and choir returned for “Sons Of 1984.” The audience sang along (of course), and Rundgren Radio had prepared a little “surprise” for Todd-sheets of paper with the song lyrics in various colors were placed on the audience chairs, and when the audience held them up as the band returned for the encore, they saw a collage of various “Utopian” symbols and Todd’s name.
All in all, a great show-hopefully a video release is planned (although there were no cameras there that night). A webcast is being done of the Philly show. 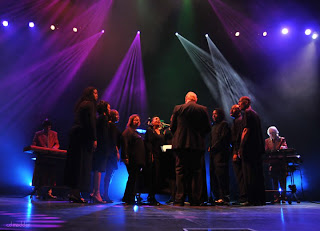 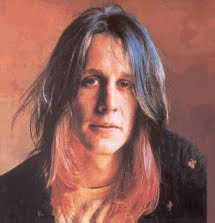 THERE’S STILL TIME!!! If you live near any of these venues, you really ought to consider attending-the show is well worth the price of admission!

9/11: Clowes Memorial Hall (with special guests the Fixx)
Indianapolis, IN