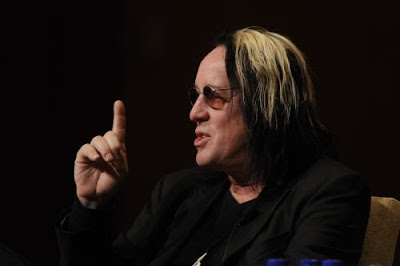 You may ask, "Who is Todd Rundgren?"

Rundgren is a ’70s producer, songwriter, overall rock star and studio wizard, best known for his songs, “Hello It’s Me” from his 1972 album “Something/Anything?” and the party anthem, “Bang the Drum All Day” from his 1983 album, “The Ever Popular Tortured Artist Effect.”

You may even ponder, "Why is he here?"

Rundgren will join IU faculty as the Class of 1963 Wells Professor in late October. He will give a public lecture, “LONGHAIR: Todd Rundgren on The Beatles Effect,” at 7 p.m. Oct. 28 in Ballantine Hall 013 during Gass’ The Music of The Beatles class. He will conduct a public performance, “CLUSTER: The Birth of the T Chord,” at 8 p.m. Oct. 31 in Auer Hall.

Music professor Glenn Gass is not surprised by the number of blank stares he receives from his students when he announces that Todd Rundgren will be lecturing during class, even though Rundgren is considered one of 1970s most successful rock stars.

But the ’70s producer, songwriter, overall rock star and studio wizard will be joining the IU faculty as the Class of 1963 Wells Professor in late October. Rundgren is the ninth person to have this prestigious position.

Gass said Rundgren is well qualified to talk about The Beatles because he’s done many covers and tributes associated with the band. He has also toured with Ringo Starr, worked with George Harrison, knows Paul McCartney and worked on and off with John Lennon in the ’70s.

Rundgren is best known for his songs, “Hello It’s Me” from his 1972 album “Something/Anything?” and the party anthem, “Bang the Drum All Day” from his 1983 album, “The Ever Popular Tortured Artist Effect.”

“He had fame handed to him on a silver platter and he gave it up to do his own thing, like producing,” Gass said. “I’m not surprised that a 20-year-old college student wouldn’t know him until you play his biggest hits.”

During his gig as a professor, Rundgren will make two public appearances on campus. The first will be a public lecture, “LONGHAIR: Todd Rundgren on The Beatles Effect,” at 7 p.m. Oct. 28 in Ballantine Hall 013 during Gass’ The Music of The Beatles class.

Sophomore Brittany Tempest, who is enrolled in Gass’ Beatles course said she is excited about having the opportunity to hear Rundgren lecture during class.

“Todd Rundgren is pretty much my hero,” Tempest said. “He’s been through it all, he’s not an outsider looking in. He’s lived it. He really knows what he’s talking about.”

Rundgren’s other public appearance will be at 8 p.m. Oct. 31 in Auer Hall where Rundgren will give a public recital entitled, “CLUSTER: The Birth of the T Chord.”

Both events will seat about 400 people and will be free and open to the public.

Gass said Auer Hall will be a great setting to see Rundgren perform.

“It’ll be just him, a guitar and maybe a piano,” Gass said. “He has a spectacular voice. I was stunned with his voice; he didn’t change the key or anything during his [Clowes Memorial Hall] performance.”

Butler senior Jackie Gredell, a member of the Jordan Jazz vocal ensemble, shared the stage with Rundgren during parts of the second half of his show.

“When I found out we were singing back up for him,” Gredell said, “I googled him and found out that he sang ‘Bang the Drum All Day’ and ‘Hello It’s Me,’ which are very popular songs, so I was excited.”

Rundgren and a full band performed each and every song from 1974s “Todd” album and 1981s “Healing” as well as an ending with audience participation on the song “Sons of 1984.”

“The Butler concert showcased his back catalogue, which shows his depth,” Gass said. “Healing was perfect for 9/11. Him, the band, the choir, the students really nailed it. It was great.”

The four-week Wells Scholar course, The Ballad of Todd Rundgren: Musical Journeys of a Lifetime, will be instructed by Rundgren, Gass and contributing faculty; Bernice Pescosolido, distinguished professor and chancellor’s professor of sociology and Nick Toth, professor of anthropology and co-director of the Stone Age Institute.

Director of the Wells Scholars Program Tim Londergan had the final say in bringing Rundgren to IU.

“Todd’s here for two weeks. Those weeks are framed for him to prep students for an understanding of his background,” Gass said.

Gass met Rundgren through the friendship that his sons had made with Rundgren’s nephew who lived next door during Gass’ year-long sabbatical in Hawaii. Only then was Gass able to approach Rundgren.

“We got to know their family. They always had them [our kids] over at ‘Uncle Todd’s,’” he said. “I had been trying to get in touch with him as the rock teacher trying to talk to Todd Rundgren, but was never able to.”

Depauw’s Executive Director of Media Relations Ken Owen, who is a Rundgren fan and scholar, invited Rundgren to speak at DePauw in April 2009.

“Todd wasn’t sure if he would enjoy lecturing, but he went, and he enjoyed it,” Gass said. “So I mentioned that we had to get him to IU, and we did with endowments from the Class of 1963.”

As to what Rundgren will be teaching, Gass said Rundgren is keeping that to himself.

“He’s got great stories to tell. Musicians are sometimes more comfortable talking about someone else they admire and who influences them versus their own music,” Gass said.