JONATHAN EDWARDS: MY LOVE WILL KEEP 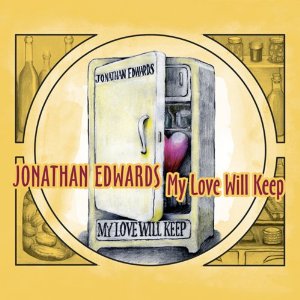 Jonathan Edwards celebrates his fifth decade of performing, songwriting and recording with the release of his new album, My Love Will Keep. He joins such artists as Jesse Winchester and David Bromberg who have re-emerged with new albums on the Appleseed Label after long absences.


For most people, Jonathan Edwards is the one-hit wonder who recorded “Sunshine (Go Away Today)” way back in 1971. Those people would probably be surprised to know that since then Edwards has released seventeen albums and toured steadily.

It's taken more than a dozen years for Jonathan Edwards to take time off from his touring schedule and put together a new studio disc, but shortly after the needle drops, it's obvious it was worth the wait. Okay, sue me-it’s a CD, so the needle doesn’t drop, but I don’t really know what the heck a laser does, and “needle drops” still sounds cool, so there!

Edwards has not lost his skill at the songwriting craft, able to infuse his songs with the subtlety of nature's small wonders and the people who are part of life's cycle. The album opens with the rich strum of an acoustic guitar, the sigh of a pedal steel guitar, and Edwards's gentle tenor, and for the next hour or so the listener is treated to a country and bluegrass influenced set of one dozen songs (including five Edwards’ originals), some of which will be familiar to concertgoers, but all shine like new with full instrumentation and the co-production by Jonathan and Jim Begley. Guest appearances abound, by bluegrass singer Claire Lynch, guitarist Duke Levine, vocalist Moondi Klein (formerly of the Seldom Scene), and Jonathan's daughter Grace.

The cover tunes include a gorgeous slow ballad arrangement of The Beatles' "She Loves You" that is more meditation than celebration. Another stand-out is an adaptation of Jesse Winchester's "Freewheeler."

Edward's distinctive, country-inflected voice, multi-instrumental mastery (guitar, bass, harmonica, ukulele, mandolin) and superlative choice of material, arrangements and sidepersons were away from the studio for way too long. Fans are rewarded with a new release that does not break any new musical ground but covers the old ground quite well.

Well worth the wait, indeed.