TOP OF THE HEEP

URIAH HEEP: INTO THE WILD 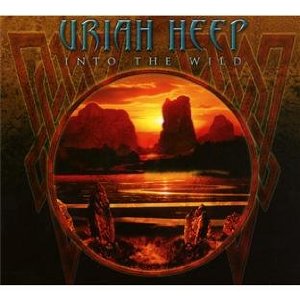 I was not familiar with UH until recently (well in the past couple of years), when Stephen T. McCarthy mentioned how their Demons & Wizards album had been a favorite of his in his rock days and he thought I'd like it based on my taste.


Stephen has since stopped listening to rock music, which I think accounts for all that angst on his blogs. But I did like the D&W album, so (as my addiction compels me to do) I set out to collect their back catalog.

Uriah Heep are an English rock band formed in 1969, and over the course of the bands' career there have been a number of line-up changes and different musical styles. The bands' influences include prog, hard rock and jazz and they were said to be the forerunners of the progressive metal scene.

With Into The Wild, most of the cast from 2008's excellent Wake The Sleeper album return, including producer Mike Paxman as well as the lineup of Mick Box, Trevor Bolder, Phil Lanzon, Bernie Shaw and Russell Gilbrook.


Into The Wild is a solid addition to the UH body of work, leaning more to an AOR sound than progressive rock, but with their signature sonic wall of sound wrapped around hooks and melodies with top notch production.

Bernie Shaw may not be the same type of vocalist that the late David Byron was during Heep's glory years, but after being the "new" lead singer for more than 20 years he's grown into the role.

Phil Lanzon plays the Hammond B-3 with the same kind of manic energy that Ken Hensley brought in the early 70s, and "new" drummer Russell Gilbrook brings a similar energy that seems to have re-energized the entire band.

All of the Heep trademarks are here, and there really is not a weak track on the album. Heep fans should like this, as well as fans of classic and melodic rock.


Nail On The Head