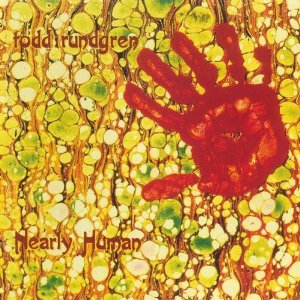 It is a crime against the cosmos that Warner Brothers deleted Nearly Human, Todd Rundgren's 1989 masterpeice, from it's catalogue.

You heard me right. The album that Rolling Stone hailed as "the best album of classy white-brat R&B since 1973′s Abandoned Luncheonette" has been deleted for more than a decade.

Nearly Human may be Todd's most underheard and overlooked album, and in my opinion it is his best; an extraordinary return to form, a soulful exercise recorded live in the studio with the usual top notch production.

This album stands as the only masterwork in the later stages of Todd's career. The first four original songs alone ("The Want Of A Nail," The Waiting Game," "Parallel Lines," and "Can't Stop Running") give you your money's worth and would qualify as a work of genius for most other rock musicians.

Other highlights include "Hawking," one of Todd's most personal and haunting composotions and still a live staple, his version of the Tubes/Rundgren composition "Feel It," and "Fidelity," a beautiful melody even if I don't agree with its' morality. The album closes with the gospel-infused "I Love My Life," and leaves you wanting more.

"Three Little Hitlers," the Elvis Costello cover that sits at track four did not even appear on the original vinyl version, and was a CD bonus track that would have made a better running order if it had been placed at the end of the program.

That is pretty much the only negative thing that I can say about this release.

Any Todd fan who ever liked any of his "Philly-soul" influenced material will absolutly love this release, recorded digitally and live in the studio. The tour which followed this release featured many of the same singers and musicians, was universally acclaimed as being briliant, and live documents on CD and DVD are still available at Amazon.

Anyone who remembers all of the song lists we did last year know that this CD is on my desert island list, and that the song Parallel Lines made my top love songs list (not to mention being the soundtrack for one of the most important relationships in my life).

This is an essential release for any serious music fan, and you better snap it up when you see it because they're asking $70 for a new copy on Amazon!

Patti Smith once said Todd Rundgren had “the ability to devour and juggle the best of what has passed and shoot it into future perfect.” In fact, she said it in these very pages, back in 1971, in a review of his second solo LP, The Ballad of Todd Rundgren.

It would be another year before the young studio savant issued his magnum pop opus, the four-sided Something/Anything, generally acknowledged to be the consummate early-Seventies ear-candy album. But even then, Smith, no minor judge of what constitutes the art of rock, recognized in Ballad‘s beguiling songs of love and loss the imprint of a gifted craftsman with the intellect and imagination to make tomorrow’s pop today and the chops to do it with one hand tied behind his back.

Ever since Something/Anything, Rundgren has diligently made records according to his own rebellious aesthetic and utopian spirituality, only intermittently exercising his ability to create lush, loving ballads and bright sing-along singles.

Admittedly, he’s made more than enough of those to fill Rhino’s new almost-two-hour-long compilation, Anthology (1968-1985). (There’s another volume dedicated to his work with the band Utopia.)

Still, Nearly Human is as deliciously retro as Rundgren has ever been, not only begging comparison to the bumper crop of radio-ready jewels on records like Something/Anything and 1978′s Hermit of Mink Hollow but harking back even further to his deep roots in sophisto-Philly soul.

Cut au naturel in the studio with a veritable philharmonic of strings, brass and background singers (sort of Rundgren conducts the Love Unlimited Orchestra), it’s a colorful evocation of Motown dance frenzy, the light gauzy cool of Aja-period Steely Dan and the silken grandeur of Philadelphia International’s greatest hits.

It’s also dosed with an almost garage brashness in Rundgren’s distinctive vocal style, a seductive amalgam of choirboy polish, shivering shy-boy croon and strained suburban-punk testifying. Rundgren doesn’t pretend to make textbook soul; he only wants to rev up his own kind of quiet storm the old-fashioned way.


The album’s boisterous opener, “The Want of a Nail,” boasts truly righteous roots – the O’Jays or Harold Melvin and the Blue Notes could have done a real torch job on this one back in ’75. As it is, guest singer Bobby Womack pours on his own soul kerosene while Rundgren turns his white wail loose in this rousing parable about horses, shoes and the importance of details (“For the want of a nail/The world was lost”). He shows equal chutzpah when he takes on a twenty-two-voice chorale in the album’s hallelujah finale “I Love My Life,” although the “Reverend Todd” shtick in the middle drags on to minimal effect. He may be A Wizard/A True Star, but he’s no Jesse Jackson.


That’s okay, because the ballads are the real heart of the record. “Hawking” is a pensive, hesitant ode to a Higher Love in the image of the slow, meditative beauty “The Verb ‘to Love’,” on Faithful. “Feel It,” co-written by keyboardist Vince Welnick of the Tubes, is a kind of Rundgrenesque take on Marvin Gaye’s “What’s Going On,” with whispery female vocals and a come-hither chorus. And even at his most accessible, Rundgren never lapses into the predictable; he throws a couple of neat vocal-harmony curves in “The Waiting Game” and “Parallel Lines” that are as captivating as his simple, addictive melodies.


Indeed, the most extraordinary thing about Todd Rundgren’s talent for making compelling if eccentric pop is that he has no solo platinum to show for it.

THE WANT OF A NAIL

PARALLEL LINES (from UP AGAINST IT soundtrack)


(do ya get it-I love this song. and if EM happens upon this blog-it still reminds me of you!)