Moogy Klingman, a musical associate of Todd Rundgren, passed away last night after a difficult battle with cancer. 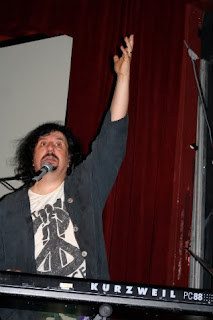 Klingman's association with Todd Rundgren commenced in 1969. Moogy was the original keyboardist for Todd Rundgren and Utopia. In his Manhattan loft, he and Rundgren constructed the "Secret Sound" recording studio where Rundgren produced his A Wizard, A True Star, Todd, and other albums. He played on 10 Todd Rundgren albums, as well as several Utopia albums.

Klingman played live for Chuck Berry, Jimi Hendrix, Buzzy Linhart, the Allman Brothers/Gov't Mule and a summer tour with blues legend, Bo Diddley. Klingman is the co-founder of the band The Peaceniks, along with Barry Gruber.

Klingman recorded solo albums for Capitol and EMI records, as well as on his own label. Klingman has released several solo albums containing songs that went on to be recorded by people like Johnny Winter, Eric Clapton, Barry Manilow, Bette Midler, Todd Rundgren and others. He wrote the song "Dust in the Wind" (not to be confused with the hit song of the same name by Kansas), which Todd Rundgren recorded on his Something/Anything? album and Guns N' Roses have occasionally performed live in concert.

Klingman collaborated with William "Buzzy" Linhart on the authorship and composition of the selection (You Got To Have) Friends, which soon became Bette Midler's de facto theme song. He produced and played keyboards for Midler on her Songs for the New Depression.