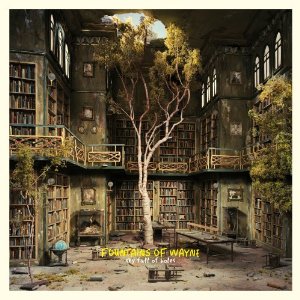 Unlike the iconic Ft. Wayne NJ garden store (featured in a couple of Sopranos episodes) that inspired its name, Fountains of Wayne are still very much open for business.


The album title comes from a line imagining how a 21-gun salute leaves a ''sky full of holes'' at a military funeral, in a kindly song called ''Cemetery Guns,'' a march accented by snare-drum rolls.  They can still turn a pop phrase, as evidenced by a couplet like  ''Let's get your phone reconnected/Let's get this room disinfected,''


FOW's music has its heart in the 1970's, a decade where the Eagles, Stealers Wheel and Nick Lowe strummed acoustic and electric guitars, repeated octaves on the piano and sang wordless vocal-harmony choruses.

Ranging from high-energy power pop to intimate, acoustic-driven ballads, Sky Full of Holes showcases the band's renowned storytelling abilities and flair for creating memorable characters in what may be FOW's most successful distillation of their musical maxims to date.

And while that sounds impressive (coming from me, anyway) and cerebral, said differently, this album is a whole lot of fun.