Bob Dylan Voted Into
American Academy of Arts and Letters 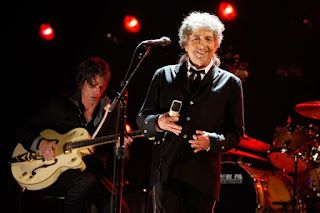 Bob Dylan has been voted into the American Academy of Arts and Letters, marking the first time a rock musician has been chosen for the elite honor society.

Officials in the Academy – which recognizes music, literature and visual art – were unable to decide if Dylan belonged for his words or his music and instead inducted him as an honorary member like previous honorees Meryl Streep, Woody Allen and Martin Scorsese.

"The board of directors considered the diversity of his work and acknowledged his iconic place in the American culture," executive director Virginia Dajani told the Associated Press. "Bob Dylan is a multi-talented artist whose work so thoroughly crosses several disciplines that it defies categorization."
Outside of the honorary choices, the American Academy of Arts and Letters consists of 250 artists, musicians and writers.
Openings are available upon a member's death, and current members conduct the nominating and voting process.
The Academy, founded in 1898 and based in New York, has historically locked out the likes of Dylan, dismissing jazz artists to modernist poets; it has largely recognized classical musicians but has also honored artists like Stephen Sondheim and Ornette Coleman.
Dajani and other officials have pointed to other organizations that recognize rock music, like the Rock and Roll Hall of Fame, as to why the Academy has skipped out on rock musicians.