"This beats going to class," Paul McCartney said with a big smile after taking the stage for a surprise performance at a performing arts high school in Astoria, Queens this afternoon. The 400 students packing the Frank Sinatra School for the Arts' auditorium seemed very much to agree. 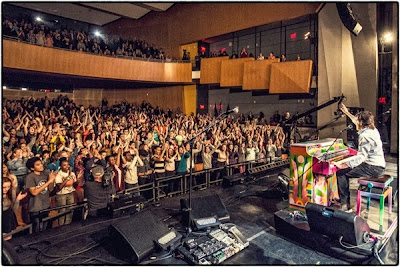 McCartney and his band played a full set of 13 songs, including three selections from his upcoming album New (due out next week) and plenty of Beatles and Wings classics – performing each one with all the boundless enthusiasm he brought to arenas and stadiums on his Out There world tour this year.

Astoria native Tony Bennett, who founded the school in 2001, was in attendance, as was McCartney's wife, Nancy Shevell, celebrating their second anniversary. (It was a day of many milestones: Today would also have been John Lennon's 73rd birthday.)

The show was filmed by iHeartRadio, and will be streamed on ClearChannel radio stations and online on Yahoo! on Monday, October 14th.

McCartney took the stage shortly after 2:00 P.M., launching directly into "Eight Days A Week" to rapturous applause – never mind that most of the crowd was born 30 years or more after the song's release.

He went on for 90 spirited minutes, with short breaks for questions from his student audience and longtime New York radio DJ Jim Kerr.

As always, McCartney seemed genuinely thrilled to be onstage, buoyed by the crowd's cheers. "I could be home watching the TV now," he said at one point. "I'd rather be here."

He clearly enjoyed bantering back and forth with his new friends during the Q&A sections. "How are you?" asked one high school senior. "Groovy!" McCartney replied.

The kids, aspiring artists themselves, seemed most interested in hearing about McCartney's younger days as a musician. "When we first started out, I was terrified of doing anything wrong on stage," he said after one girl asked for the greatest lesson he learned early on. "But then I learned that people don't mind. They actually kind of like it!"

Later, Kerr asked McCartney, in his sonorous radio voice, "How can one mind create so many memorable melodies?" McCartney paused. "Uh . . ." he began. "I don't know. Thank you for the compliment, but I don't really think about what I do." On reflection, he realized the answer was simple: "I just love what I do."

This much was obvious from watching him onstage. McCartney hopped from his Hofner bass to two acoustic guitars to his psychedelically-painted piano, singing his heart out all the while.

After closing with a heartfelt "Hey Jude" and taking a bow with his band, he seemed almost reluctant to leave the stage.

McCartney flashed a quick peace sign at the crowd on his way out, and the giddy students filing out of the auditorium raised an endless chorus of "na-na-na-na"s, echoing through the school's corridors.