IT SNOWS IN HEAVEN, TOO

As some of you are aware, I spend way too much money on music (records and CD's, mostly CD's).

What you may not know is that one genre I spend a lot on, even to the inclusion of country titles, are Christmas CD's.

Here's a hint-if you want to collect Christmas CD's, look for them after Christmas.

They go on sale.

Before Christmas, they can be pricey.

Each week between December 26 and January 6 (anyone out there know the significance of January 6, or is that just a Catholic thing?), I end up buying a bunch of Christmas discs that I won't listen to for eleven months.

Each December, I try to listen to the new acquisitions as well as some of the old favorites.

So during this month, a season where the suffering of retail employees is commemorated, and some people celebrate the birth of Bethlehem's favorite (and God's only begotten) Son, I thought I'd tell you about some of the Christmas discs I am listening to. 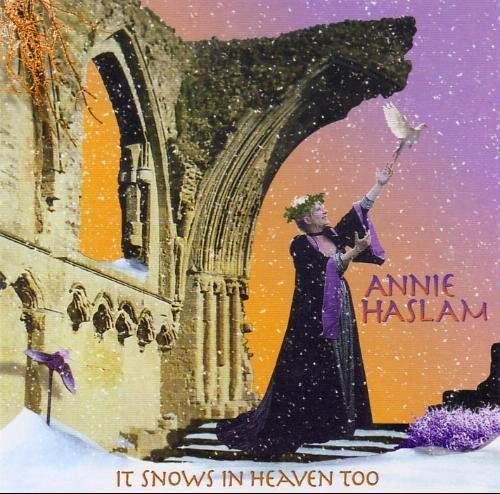 Today's disc is from Annie Haslam.

Those of you in my generation may remember Annie as the lead singer of Renaissance back in the day (she still fronts the band and can still sing like an angel).

Apparently, there has been a tradition of Christmas shows in the Philadelphia area, her adopted home.

A decade or so ago, she released a holiday album that featured the following track list:


Annie's voice has a haunting quality, and this disc finds her still able to hit the highs-in an era of reality-show singers who don't actually sing very well, Annie still delivers the goods.

AWAY IN A MANGER

Sadly, this CD is out of print...but someone is selling a new copy of Amazon for $613.55 (how the heck did they arrive at that price)?

The good news-you can buy the digital album directly from Annie right HERE.

Or you can look for the CD in the used bins...half the fun of collecting is in the searching!

Prog rock fans take note-this is NOT a prog CD-these are Christmas songs. It's a great disc, but if you are looking for the Holy Grail of Renaissance albums, this is not it.

Renaissance did release a new album this year (completed just before Michael Dunford sadly passed away) that is quite good.

That record can be purchased HERE.