IF WISHES WERE HORSES

Every year, my friends Stephen T. McCarthy and Nappy make a trek to a secret wishing well location to offer up his change and make a wish in the hopes that Tiny Tim will score a second top forty hit.

I don't know why the location is such a closely guarded secret, as the wish has not yet come true. Or has it? Could the wish be answered this coming Tuesday? Read on, and decide for yourself.

Hebert Buckingham Khaury, best known by his "Tiny Tim" alias, was most famous for his rendition of "Tiptoe Through The Tulips, which he recorded in a distinctive high falsetto voice, and was generally regarded as a novelty act.

In a 1970's Playboy interview-what, you thought men bought it for the pictures?-Tiny Tim said the following, which prompted Stephen T and Nappy's annual wishing trek:

“Most of all, I’d love to see Christ come back to crush the spirit of hate and make men put down their guns. I’d also like just one more hit single.”

They have even formed a loose association called "The Tiny Tim Wish Fulfillment Team" to bolster the power of their wishes.

Heck, I even made a wish this year. And while I am not claiming to have had the wish that made a difference, there is something very different about the 2010 wishes. 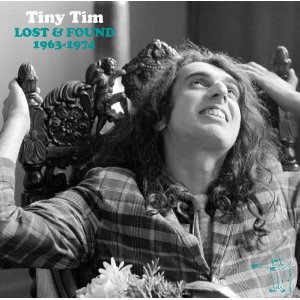 On January 4, 2011, a limited vinyl LP pressing of "Lost & Found" drops, which contains tracks from Tiny's pre-fame and post-fame years, and "features some of the most intriguing, eclectic, and enjoyable material of his career."

Now a limited edition vinyl pressing is a far cry from a top 40 hit, but considering we're talking about a man who has been dead for a decade and a half, and who had his last hit more than forty years ago, I am wondering if maybe this is the wish coming true. 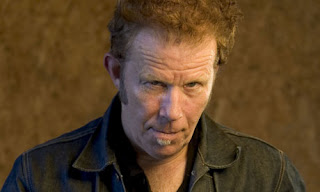 Tom Waits is to be inducted into the Rock and Roll Hall of Fame, it was announced yesterday. The gravel-voiced singer will share a hallowed place next to Little Richard, the Rolling Stones and the Band.

I don't know about "hallowed place."

"I never really cared about the Rock and Roll Hall of Fame," Waits said, "but now I am surprised to discover how much I do care."

"It's funny to me how artists seem to mock the RRHOF before they get in, and then embrace it. Me, I mock it. It's everything rock and roll was created to stand against.

Every year, the hall of fame nominates 15 artists for induction into its rock'n'roll annals. Five hundred music industry professionals vote on these suggestions, with a nod going to every act that receives more than 50% of the vote. Some artists, such as Darlene Love, are nominated several times before making the cut. But not the rest of this year's acts: Cooper, Waits, Diamond and Dr John were approved on their first-ever ballot.

For Waits, the news brought memories of his mother, who died this year. "I wish she was alive to hear the news," he said. "She didn't respond to rock and roll per se, but she would have loved to have a reason to get all dolled up ... [and] the idea of having a Waldorf salad AT the Waldorf Astoria, would for her have been the cat's pajamas."

If they had a ceremony but not the physical building, I might feel differently. When I saw the building, it was kind of dull to me. And overpriced. The Pro Football Hall of Fame (an hour away) was cheaper and more interesting.

Book Review: A Wizard, A True Star: Todd Rundgren in the Studio

A review by Ric Hickey

Paul Myers has penned the definitive Todd Rundgren biography. Dispensing with the typically invasive biographical method of delving into a subject’s personal life, Myers here instead sticks to the real meat of the matter: The artist’s work. Dedicated solely to Rundgren’s music and production, the book is a much more intriguing and respectful biography than one could ever pen in the more traditional vein. Forgoing the need to supplant the text with salacious anecdotes and insidious speculation, Myers’ respectful approach is best exemplified by his decision to dedicate no more than a single paragraph to Rundgren’s tumultuous break-up with Bebe Buell.

Though Rundgren’s tongue had already taken up permanent residence in his cheek by the time he named his 1973 magnum opus A Wizard, A True Star, time has proven this moniker to be apt, accurate, and certainly suitable for this book’s title as well. A willing participant in the interview process for this manuscript, Rundgren’s every contribution is insightful, revealing, acerbic, and often funny as hell. From the first few pages his quotes are brutally honest, including very frank discussions about his experimentation with drugs.

Young Rundgren’s high school band experience morphed into the psychedelic garage act Nazz and subsequent recording contract as a solo artist. First establishing himself as a hit-maker as early as 1972, he was soon tapped to produce other artists as well. With “Hello It’s Me” topping the charts, he was busily constructing his first studio in a friend’s loft apartment on 13th street in New York City. Making it up and learning the ropes as he went along, Rundgren mastered the rules of performance and production as he simultaneously went about breaking them to suit the needs of his impeccable ear. In retrospect, it’s amazing how the first fruits of his improvised construction of a recording studio from the ground up resulted in the psychedelic masterpiece A Wizard, A True Star. This was just one of what would be a string of wildly diverse and endlessly inventive self-produced solo LPs.

In the early ‘70s, Rundgren settled comfortably into the producer’s chair and helped birth two hard-rock classics of the era: The New York Dolls’ self-titled debut album and what would turn out to be Grand Funk’s biggest selling LP, We’re An American Band. Rundgren’s production resume reads like a who’s who from almost every imaginable subgenre of rock music, from prog to punk. The list of enthusiastic contributors to this book includes Patti Smith, David Sanborn, Hall & Oates, Steve Hillage, Jim Steinman, Meat Loaf, Flo & Eddie, as well as members of the Psychedelic Furs, Badfinger, the Tubes, Cheap Trick, the New York Dolls, XTC, and Utopia.

Though the band members seemed to grasp that Utopia was not a top priority to Rundgren or his label, he did keep them busy as hired hands whenever possible. Sidemen on countless projects, Kasim Sulton and Prairie Prince were employed numerous times, including the sessions for the first LP by ‘70s teen pop idol Shaun Cassidy.  (Correction here-it was Willie Wilcox on these projects, the drummer for Utopia. Prarie Prince was drummer for th Tubes and did not become a Todd sideman until the 90's)

No one in the music business was busier or in higher demand in the 1970s than Todd Rundgren. He produced a staggering number of hit records around this time, including Meat Loaf’s seminal Bat Out Of Hell LP. Though the torrid and complicated back history of that legendary album is well known by now, it is curious to contemplate how the backing band assembled for those sessions was one half Utopia and one half Springsteen’s E Street Band.

In the ‘80s, Rundgren’s already busy production schedule kicked into high gear with a steady stream of artists passing through his studio. At this time, he kept himself busier than ever in order to keep his ill-fated video production studio afloat. In addition to his reputation as an audio production genius, he was an early proponent of video and computer technology. He often found himself way ahead of the curve with these emerging technologies, and many of his experiments failed to generate much notice or sales. The advent of the personal computer marked a major turning point for Rundgren and opened him up to a world of possibilities. He continues to explore new technologies today.

Over the course of literally hundreds of sessions with dozens of artists displaying varying temperaments, there were bound to be clashes in the studio between hardheaded artists and their sarcastic, self-assured, and sometimes condescending producer. In the long run and in spite of their strong differences at the time, many found that Rundgren was almost always right in his convictions. In addition to his role as producer, he is also a multi-instrumentalist who contributed mightily to hundreds of these recordings.

Seemingly, every artist that has worked with him over the years has nothing but good things to say about him. Many credit Rundgren with making them better musicians and songwriters. Others say he broadened their horizons, and in numerous cases his efforts propelled them to greater fame. Today he looms like a mischievous guardian angel over the careers of countless recording artists, and this tome about his life and works pays a great and important homage to his legacy.

A Wizard, A True Star: Todd Rundgren in the Studio


Purchase: the book at amazon.com

Read the original review
No comments:

Three decades ago today, John Lennon was shot to death outside his home in New York's Dakota building. Lennon was murdered by a fan on Dec 8 1980.


No matter what you thought of his solo work or his political views or Yoko (that includes YOU, Stephen T!) there is no questioning the influence Lennon had on shaping the world of popular music during his tenure in that moderately successful band known as the Beatles. 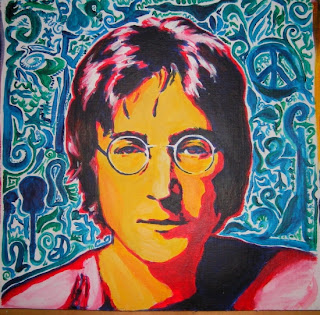 Fans are gathering to pay tribute to John Lennon on the 30th anniversary of his death. One of the biggest tributes will take place in Central Park, at a spot dubbed Strawberry Fields, after the famous Beatles song.

Rundgren, whose innovation as a producer and recording artist has spawned one of pop music's most devout followings, will return to the studio January 17-19, 2011 for Gigatone's myRecordFantasy event for his album project, "(re)Production."

myRecordFantasy, held at Gigatone's headquarters at the Track Shack Studios in Sacramento, will feature Rundgren's fans from around the world vying for the once-in-a-lifetime opportunity of auditioning to perform on the Rundgren's new album.  In addition, fans will be attending and participating in nightly jam sessions with Rundgren and special guests.

(re)Production features Rundgren performing selections he's produced for others. It includes such hits as the Psychedelic Furs' "Love My Way," Meat Loaf's "Two Out Of Three Ain't Bad," Grand Funk Railroad's "Walk Like A Man," XTC's "Dear God," Cheap Trick's "I Can't Take It," as well as songs by The Tubes, Hall and Oates, The New York Dolls, Rick Derringer, Patti Smith, Badfinger and Bourgeois Tagg, among others.

Todd broke onto the music scene in the late 60s fronting Nazz, with the psychedelic power pop hit "Open My Eyes". Upon the release of Rundgren's third solo album, the 1972 masterwork Something/Anything? and its melodic hit singles "I Saw the Light" and "Hello It's Me", the rock press promptly dubbed him "Rock's Wunderkind Renaissance Man", and forever solidified his status as a gifted pop craftsman. His follow-up, A Wizard, A True Star, was a sonic kaleidoscope of progressive rock, serving notice that Rundgren was not going to walk a straight pop line. The universally acknowledged godfather of the marriage of music and multimedia, his production, recording, touring, technological trailblazing throughout his solo career has taken him through a broad swath of creative stylings.

As with previous myRecordFantasy events, the entire event is filmed in high definition, with episodes airing on Gigatone's Channel Page on YouTube at http://www.youtube.com/gigatonerecords.