Concluding our consumption of the Bourbon Advent Calendar....

Day Ten- Today's selection are both brands you are probably familiar with, but from some of their higher end selections. 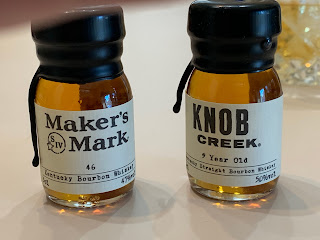 While I am quite familiar with Maker's Mark, I had never tried their "46" offering before, and liked it enough to want to at least try another shot again (you can't buy a bottle of everything, right?).

I may have had the Knob Creek 9 year before but it was before I started taking photos of the bottles. It did not disappoint.

Day Eleven-  Back to brands I am not familiar with-Legent is a Kentucky bourbon finished in wine and sherry casks and was quite good, as was the Uncle Nearest 1856, a Tennessee  blended whiskey. Day Twelve- Today's selections were a familiar old friend and a stranger. Jack Daniels's was my first whiskey, and for years the bottle I had in the house. While it has been years, and I have never tried their single barrel release, I liked it, although the aftertaste was similar in strength to my memory of the basic Jack's bottle. 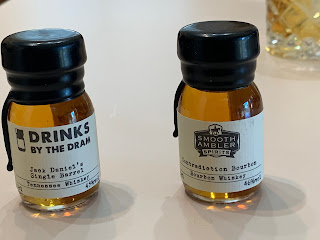 Contradiction Bourbon is from Smooth Ambler Spirits in WV, and is a blend of their own wheater bourbon and two ryes procured from Tennessee and Indiana. It makes for an interesting taste experience to finish off the bourbon calendar.

What you say? How can this be?

You have completed the Advent calendar in twelve days?

If you recall, I had made my own calendar before Jeannie surprised me with this one.

We will review that calendar beginning with the next post-while many of the choices are more common fare (due to the nature of what was available in local shops), there are a couple of things you may not be familiar with.

Continuing our enjoyment of the Bourbon Advent calendar.....

Day Four-I think I said this in the earlier post, but I am still new to rye whiskey-I'd had one from a local distillery in Seattle over the summer, and that was my first exposure and I did not like it a lot.

During one of my sampling nights at a local whiskey bar (The Cabin in Glendale AZ) I was accidentally given a shot of rye when I'd ordered the same distillery's bourbon, and said "what the heck" and drank it-I liked that better.

This Cherrywood Rye was tasty, and not quite as spicy as the other ryes I have had. The Michter's was quite good-so far I have enjoyed every Michter's shot I have tasted. 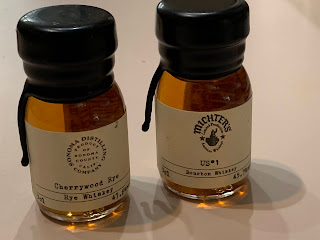 A little off-topic, but there is an Irish whiskey called Dead Rabbit that I thought was quite like a rye and is worth a taste if you see it on the shelf.

Day Five-The pure Kentucky was quite good-a little strong on the aftertaste but that may have been the higher proof. I have read in some reviews of barrel strength whiskeys where people add water to them and I do not quite get the point of that, but to each their own. I don't like mixing my whiskey into cocktails, either, but my wife does and I'm sure as heck not going to tell her not to-I just ask her not to use the pricey stuff for that.

But onto my favorite of the calendar (so far)-when I told Jeannie that the shot was called "Burnt Ends" she made a face, but when I took a sip, I FREAKIN' LOVED IT! It had a strong barbeque flavor that complements the bourbon flavor, not quite as overpowering as the cinnamon in Fireball, but certainly more than just a  flavor from the finishing cask.

I immediately went online to see where I could score a bottle, but so far I do not see it available in the US-from what I can tell this is a UK whiskey despite the spelling (usually the UK spells whiskey as 'whisky") 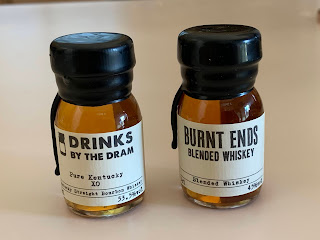 Day Six - Today, both selections were from Four Roses, a brand I am already familiar with. The bottle to the right seemed to be the same as a shot I had recently had on a night out at our local sports bar, and did not disappoint.

The bottle on the left was a single barrel selection at 100 proof, and while the aftertaste was a little powerful (again, I assume from the higher proof) it was also quite nice, although I am not sure it would warrant a significant cash outlay over the basic offering. 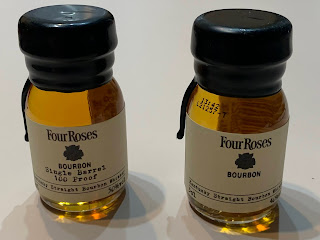 Day Seven- Today the first selection went back to Illinois' Few Spirits distillery and their bourbon offering, which seemed to have a little of the spiciness of rye and was quite good.

The Daddy Rack was also good although this brand seems to be hard to find. 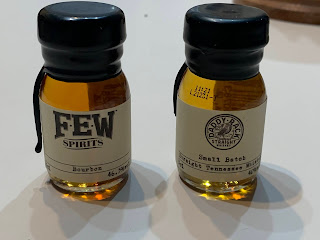 Day Eight-today's selections were two bourbon whiskies that both went down well. I would be hard pressed to say which one I liked better, although it may have been the James Cree by a little bit.

Both seem hard to come by if you want to purchase a bottle, which is the one frustration of the alcohol laws in the US-we should be allowed to buy bottles directly from distilleries and have them mailed to us.

Tell your congressman (or congresswoman)! 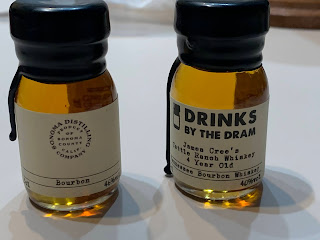 Day Nine- I thought that based on the name, I was going to like 'Charcoal & Cornmeal & Rickhouses & a Decade' as much as the Burn Ends offering from Day 5.

Now don't get me wrong-I liked it, and the flavor was quite interesting, interesting enough for me to see if I could score a bottle (I can't seem to find it) but so far that Burn Ends whiskey was the best-I'd buy another calendar if they would just stock it with the Burn Ends.

This was my first time sampling a Michter's Rye product, and the brand does not disappoint. I'd learned of  Michter's in a book '101 Whiskies To Try Before You Die' and so far everything I have tasted from that brand lives up to the book's hype. 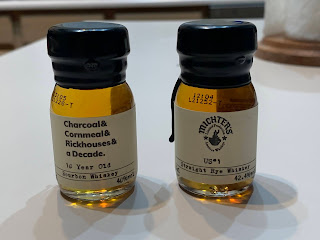 A couple of months ago (sometime in October), Jeannie made reference to an Advent calendar, something I had never heard of.

Growing up, my parents had an Advent wreath with four candles, but Jeannie talked about a calendar with little openings and little candies for each day from December 1 to December 24.

I thought-'there should be one for whiskey'-and googled it, and lo and behold there are, although they were all from companies based in the UK.

I found an empty Advent calendar box online an purchased it, only to find it had twelve openings, so while they called it an 'Advent' calendar it was really more suitable for the 12 days of Christmas.

Undeterred, I bought 24 shooters of various whiskies (one each for Jeannie and me), leading up to Blanton's on the final day. I had not decided whether we would do this during Advent and augment it with whiskey from the shelf, or do a 12 days of Christmas calendar. 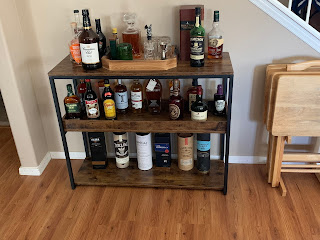 Jeannie made the decision easy-she had ordered one of the calendars from the UK as a surprise, so I suggested we share that for the first 12 days of Advent and then finish the season with my homemade calendar. 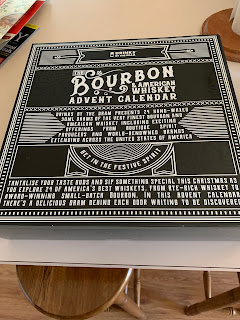 I am sure that if Jesus had been born in Kentucky rather than Bethlehem, the Magii would have given bourbon as one of their gifts (probably 20 year Pappy Van Winkle)

Here are the first three days' selections from the UK calendar: 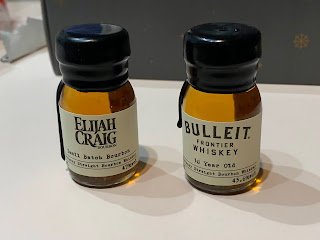 Day Two-Old Scout whiskey (good, but a little harsh) and a Whistlepig six-year rye. The rye was quite good, and I am still new to rye whiskey 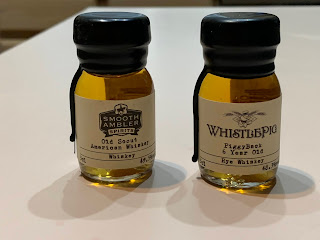 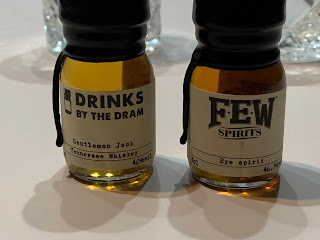