Coming off of a highly successful 2011 marked by the release of the critically acclaimed Testimony 2 and an enthusiastically attended tour throughout the U.S., Mexico and Europe, Neal Morse could easily have justified going on a creative hiatus to catch his breath. But that would fly in the face of his convictions and the sense that he is being led to build upon the swell of success he is experiencing. 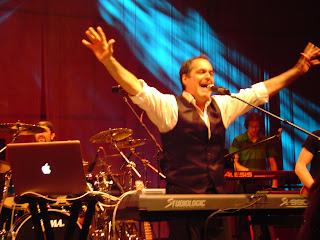 In January 2012, Morse was pondering the possibilities of a change in direction. After all, it had been a decade since he left the progressive rock stalwart Spock's Beard to pursue a solo career that would allow him to write more freely about his personal faith. And in that time he had recorded 6 impressive studio records that were heralded for their unique hybrid of epic compositions that tested the boundaries of musicianship while maintaining a remarkable sense of melody through irresistible hooks and addictive choruses.


He could have taken a break.


Or gone in an entirely new direction.


But he felt led otherwise, as summed up in the new record's title track: "You've got some new momentum, you better keep going."


Morse's long time studio partner and friend Mike Portnoy had a small window in January 2012 when he could record. The only problem was, there was only one song and a few bits and pieces written.


Taking a leap of faith, he scheduled a recording session with the drumming legend and longtime bass player Randy George in two weeks, hoping that the music would arrive before the musicians. And boy did it ever. 
In addition to the accessible title track, there's the quirkily clever, Gentle Giant-inspired "Thoughts Part 5," which follows in the footsteps of the previous "Thoughts" tracks penned by Morse with Spocks Beard. "Smoke and Mirrors" trods an introspective, acoustic path, while "Weathering Sky" offers a raucous cry for deliverance and renewal from a searching soul.


Rounding out the shorter tracks is "Freak," an upbeat, strings-charged song unlike anything Neal has recorded to date. Last comes "World Without End," a near 34-minute, six-part epic that contains everything that defines Morse as a master of the genre.


Another highlight of this record is that, in addition to a masterful solo by guitar wizard Paul Gilbert, there are contributions from Adson Sodré, Bill Hubauer and Eric Gillette—three musicians who were selected as members of Morse's new touring band through an exciting YouTube driven open audition process. 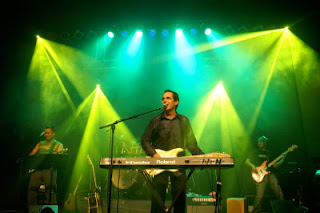 While Momentum propels Morse forward and further cements his standing as a prolific progressive rock icon, it steers clear of the potential "more of the same" trap, and features fresh musical angles and some of the finest performances to date by the Morse, Portnoy, George team.


The release of Momentum on September 11 will be quickly followed up by a North American tour that spotlights the fresh talent of his new live band, with stops in such cities as Nashville, Jacksonville, New York, Chicago, Denver, Los Angeles, Seattle and Mexico City.


Much to the delight of progressive rock fans around the globe, Neal Morse is moving ahead with Momentum and there doesn't appear to be any kind of end to his unique creative talent in sight. 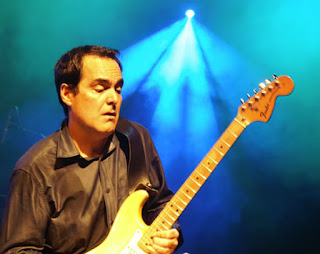 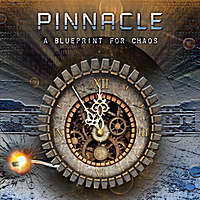 Together for more than a decade, Pinnacle plays music that is accessible, song-based, and melodic;  employing time changes and other techniques attributed to progressive rock in techniques that are some what understated and appear so natural that many listeners may miss them all together.

A Blueprint for Chaos is Pinnacle's third album and with the addition of a singer/keyboardist to enhance their sound, makes the original trio a quartet.

With influences as disparate as Mahavishnu Orchestra, Spock's Beard, Klaatu, Marillion and Bruce Springsteen, Pinnacle can "prog" with the best of them but are not afraid of a well-written pop tune.

Unlike many current acts who make an obvious attempt to recall the seventies progressive sounds, Pinnacle seem to simply play things their way, and the influences are there in the mix, while the sound is modern and had an edge. The longer pieces draw you into the listening experience, and I recommend playing it on a proper system (no MP3) with some headphones.

A band who deserve to be heard.

Available at CD BABY or at the band's website. While you're there, you might want to pick up Meld, the last release as well. You'll want to hear more eventually, and you'll save on postage.

MARILLION SHOW OFF THEIR POWER

MARILLION have posted a new song, "Power", from their forthcoming album, online. 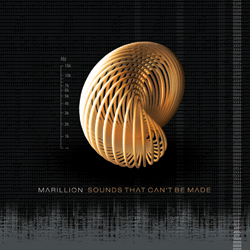 "We're just putting the finishing touches to 'Sounds That Can't Be Made' before we head off to Amsterdam, Hamburg, Copenhagen, Gothenburg, Stockholm, Oslo and Bergen. There are still tickets available for all shows and we know it's been raining as much in Europe as it has been in the UK, so come along to one of the shows and shelter from the rain!

In the meantime, there is still time to support us by pre-ordering Sounds That Can't Be Made directly from our online shop. We really do appreciate all the faith and love you give us - it continues to astound us every day.


As a thank you - we would like to share the final version of one of the songs from the album - it's called 'Power' and you can listen to it now. This video also features all the titles of the songs too!

Please share this to your friends and family - spread the word!


Marillion were pioneers in the use of the internet to reach out directly to their fan base.

After the release of their 1997 album, the band, virtually ignored by their label, could not afford to make tour stops in the United States. Their dedicated US fan base decided to solve the problem by raising some $60,000 online to bring the band over the pond.

The band decided that they would try a radical experiment by asking their fans if they would help fund the recording of the next album by pre-ordering it before recording even started. The result was over 12,000 pre-orders which raised enough money to record and release their 2001 effort, Anoraknophobia

The success of Anoraknophobia allowed the band to start recording their next album, but they decided to leverage their fanbase once again to help raise money towards marketing and promotion of a new album. The band put up the album for pre-order in mid-production. This time fans responded by pre-ordering 18,000 copies.

Marbles was released in 2004 with a 2-CD version that is only available at Marillion's website – kind of a 'thank-you' gesture to the over 18,000 fans who pre-ordered it, and as even a further thanks to the fans, their names were credited in the sleeve notes (this 'thank you' to the fans also occurred with the previous album).
Marbles became the band’s most critically acclaimed album in more than a decade, prompting many positive reviews in the press.

The band released "You're Gone" as the lead single from the album, releasing it in three separate formats and encouraged fans to buy a copy of each format to get it into the UK top ten. The single reached No. 7, the first time a Marillion song had reached the UK top ten since 1987.

The second single from the album, "Don‘t Hurt Yourself", reached #16, and a download-only single, "The Damage (live)", was the highest new entry in the new UK download chart at number 2.

Not bad for a bunch of guys staring down a small incline at fifty!

Happiness Is The Road, released in October 2008, again featured a pre-order "deluxe edition" with a list of the fans who bought in advance, and a more straightforward regular release.

Before the album's release, Marillion achieved a world first by pre-releasing their own album via P2P networks themselves.

Upon attempting to play the downloaded files, users were shown a video from the band explaining why they had taken this route.

Downloaders were then able to opt to purchase the album at a user-defined price or select to receive DRM-free files for free, in exchange for an email address.

The band explained that although they do not support piracy, they realised their music would inevitably be distributed online anyway, and wanted to attempt to engage with p2p users and make the best of the situation

Their seventeenth studio album will be titled Sounds That Can't Be Made and is scheduled for release in September 2012
No comments:

Concert organizers pulled the plug on rock stars Bruce Springsteen and Paul McCartney after the pair defied the sound curfew at London's Hyde Park, silencing their microphones at the tail end of the show.

Springsteen had already exceeded the 10:30 p.m. curfew by half an hour Saturday night when he welcomed McCartney on stage and the pair sang a pair of Beatles hits.

But the microphones were turned off before they could thank the crowd, forcing them to leave the stage in silence.


A statement from concert organizer Live Nation said it was unfortunate that Springsteen's three-hour-plus performance was stopped "right at the very end," but it said that the curfew had been laid down by the authorities "in the interest of the public's health and safety."


Huge concerts in Hyde Park, a 350-acre (140-hectare) expanse of landscaped garden and parkland that abuts some of London's wealthiest neighborhoods, have increasingly caused friction between fans and the area's well-heeled residents, many of whom gripe about the late-night noise and nuisance.

With complaints on the rise, local officials have decided that as of next year, the number of concerts will be slashed from 13 to nine. Also in 2013, they plan to reduce crowd limits from 80,000 to 65,000. 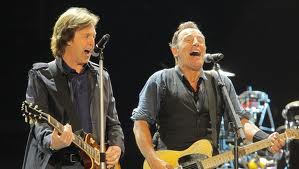 "English cops may be the only individuals left on earth that wouldn't want to hear one more from Bruce Springsteen and Paul McCartney!" he wrote on Twitter. "On a Saturday night! Who were we disturbing?" Finally he added: "There's no grudges to be held. Just feel bad for our great fans. ... It's some City Council stupid rule."

London mayor Boris Johnson, said Sunday that the singers should have been allowed to keep going, telling London radio, "You won't get that during the Olympics.
2 comments: