SOMEONE TO LAY DOWN BESIDE ME

I was introduced to Karla Bonoff by my good high school friend Chuck E (not the guy from the Rickie Lee Jones song), and I loved the album. I never picked it up on CD, and the record sat with the rest of my vinyl collection through the 80's and 90's, forgotten. 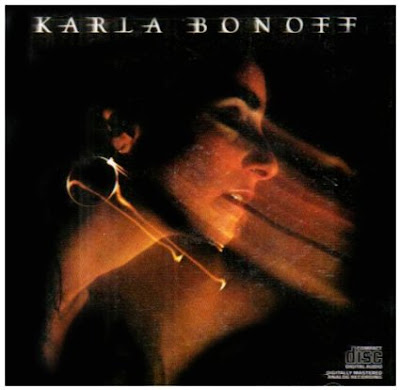 Ten years or so ago, I was sorting through my vinyl and came across the record. Realizing how long it had been since I heard it, I played the record. Wow, is it ever as good as I remembered!

I went out and found Karla's entire catalog on CD. Well, not all on the same day, but I got 'em!

A couple of weeks ago, her debut was featured in a post of The Lefsetz Letter, which inspired me to pull the album off the shelf.

I hope Mr. Lefsetz does not mind me quoting from his post.... the yellow italics are his words, not mine, but really capture just how special a songwriter and performer Karla Bonoff is.

Linda Ronstadt was America's sweetheart, the coolest rock chick who owned the airwaves, she released her third smash in a row, "Hasten Down The Wind" and the killer track, which finished the LP, was "Someone To Lay Down Beside Me."

The voice we all knew and loved singing a song by someone we were completely unfamiliar with, one Karla Bonoff.

A beautiful song sung by someone who seemed to own the world, the darkness was absent.

But when Karla sang the same song with the same arrangement...WHEW!

"Well morning is breaking,
the street lights are off
The sun will soon share all the cost
Of a world that can be sort of heartless
Not like love that you feel in your heart"

Sung by an unknown, someone just like us, the words seemed so much more...BELIEVABLE! This was someone who was yearning for connection in a world that so rarely provides it, back before Match.com, never mind Tinder. When loneliness killed.

You heard Karla sing and you thought about yourself. And how the world really was kind of heartless, that's the key word in the song, the one you remember.

I had the fortune of seeing Karla Bonoff last year. The friend I attended with, while claiming to be a New Yorker, is essentially an Arizona native (she was ten when she moved here) and suffers from that malady common to Arizonans, the blind worship of all things Arizonan.

So to her, Linda Ronstadt is a saint, and we had a spirited debate when I said I always liked Bonoff's originals to the Ronstadt covers.

To me, Ronstadt had a decent voice, but since she didn't write anything, she was less compelling. I mean, covering Elvis Costello's Alison? Really?

"Oh baby, this time it's good-bye
And you can be sure that I won't cry
Our love is just a faded story
I'm walking down the road
And you've just got to let me go"

"I Can't Hold On" is upbeat as opposed to the dirgy "Someone To Lay Down Beside Me." It evidences the freedom of one who's thought about it a long time and has broken away and is now reveling in the power of her aloneness.

These are not the words of a fly-by-nighter. She tried, she's not the one who jumps from relationship to relationship, but she's finally reached her limit, she's done.

"And maybe next time you'll cry
When someone like me says good-bye
You'll wake up when she's gone and wonder
How you could let her go
But look at me, I'm going under..."

Come on, if you haven't said this to yourself, maybe even made the mistake of saying it to your ex, you're a leaver, not one of the left. You've given your all and it's still not enough. You want to scream and shout, but they're still playing games...

It's all here. This is the best post breakup song I know, I've sung it to myself many a time.

So different from today's music, where the singers are winners and kick their significant others to the curb. You can tell Karla Bonoff's been hurt, she's been on the losing end of love, but now she's resigned to the loss, she's gonna let him go.

This is the last thing you want to do!

You've merged. You've even started to look alike. The person closest to you, who knows all your secrets, is no longer there, and will ultimately be with someone else. It's soul-crushing.

The rest is in the Vault for those with the key...

This week's Vault entry is the latest by Smokin' Joe Kubek, who passed away last weekend at the all-too-young (from where I am sitting) age of 58.

For a quarter century, Kubek defined the Dallas blues scene, releasing fifteen albums over the years.


Kubek died shortly before he was to appear onstage at the Pleasure Island Seafood Blues & Jazz Festival in North Carolina, according to his label. He was scheduled to play there Saturday afternoon with his longtime collaborator Bnois King.

Earlier this year, Kubek and King teamed up (for what would be the last time) for Fat Man’s Shine Parlor, delivering the goods once again. 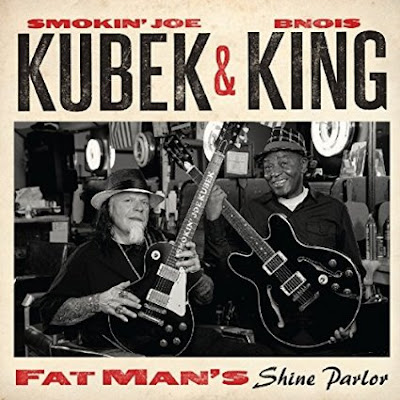 Here's a taste of the record, which is sitting in the Vault.

I WANT YOU BACK (NO, NOT THAT ONE)

I lived in South Jersey (near Camden, outside of Philly) from 1989 through 1993, and shortly after my move found Compact Disc World in Marlton.

Although a smaller retail footprint, their selection was better than Tower Records, and they played a lot of cool stuff in the store. I was there every Saturday.

Which was how I heard of the band Cry Charity’s lone album, “Peace Love Humiliation.” CDW had it playing in the store, I loved a couple of the songs, and snapped it up.

Cry Charity put together a solid album and while the genre does not make it into my player that often these days, I still love Tracy Bartelle’s voice.

All in all, it was a remarkably polished work, and had it been given even a half-decent promotional effort, this album might well have been a major seller.

Unfortunately, the label folded just weeks after Peace Love Humiliation was released, throwing the band into legal limbo and killing any hope for the album's success. Cry Charity never recorded anything again, although Bartelle issued a couple of digital albums during the last decade.

No You Tube for these guys, so I hope this file I created works...

Vault keyholders know where to go for the rest of the album...not sure it this can be found on download sites, but there were used copies to be had on Amazon..
5 comments:

AIN'T THERE ONE DAMN SONG THAT CAN MAKE ME BREAK DOWN AND CRY?

David Bowie is always described as being "ahead of his time," and besides thinking that is a dumb saying, I am not sure I agree.

Take his 1975 release, Young Americans. No, really, I have an extra copy, so take it.

The album draws on soul music, which was in full swing (pun intended) in the mid-70's-in fact, disco was thriving by the time the album was released.

Ahead of its time? Hardly.

But a reflection of its time, successfully blending soul and rock elements?

I'll give him that.

I'm pretty sure I got my mitts on this one when my oldest brother moved out to go to college and left it behind. It is one of my favorite Bowie albums, and in my opinion far outshines his 1980's commercial high water mark, Let's Dance.

And why does it matter that it's one of my favorite Bowie releases?

SOMEBODY UP THERE LIKES ME

It's also in the Vault, for you in the know.

Interesting trivia-forty years ago, the song "Fame" from this album hit number one on the Billboard 100 (week of September 20, 1975)