MY BRIEF AFFAIR WITH MAGGIE

Jeannie and I booked a trip last year (2020) to Ireland through an outfit called Great Value Vacations. We have used them for international trips in the past-they are amazingly affordable and the trips have all been great.

Unfortunately, COVID hit, and the Ireland trip was cancelled. GVV's policy was no refund, but you could use the credit on a future trip. We booked a "future" trip in late 2020, and to no one's surprise, that was cancelled.

I booked a trip in August 2021, but decided to make it a US-based trip (thinking COVID was still making travel very iffy), and where we landed was a bus tour that went from Seattle, through Oregon and Northern California's Redwood forest, and finished in San Francisco.

While I have never been a fan of the idea of a bus trip, and having done one, am not sure I would do it again (I like being able to set my own schedule), it worked out well for this trip, as on the way to the airport, what had been a nagging ache in my lower back seemed to get worse, and by the end of our first day in Seattle (Friday), turned into extreme pain. 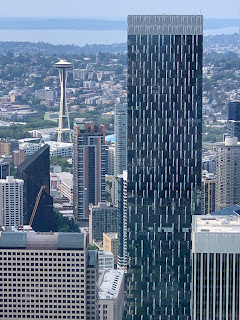 Day two in Seattle, it was even worse, and my self-diagnosis was a pinched nerve based on a prior one I'd had a decade or so ago. A phone call to my sister (who is an MD) confirmed this was probably the case, and she recommended anti-inflammatory and lots and lots of stretching.

However, walking anything more than a half a block was a challenge, and I am sure driving would have been worse, so I was glad this was a bus tour, although the condition did cast a pall on the trip.

We had lunch Saturday at an Irish pub (The Blarney Stone) across the street from Pike Place Market. Nice atmosphere and a pretty good whiskey selection. 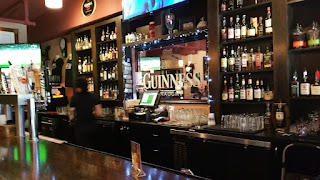 I had a shot of Midleton Very Rare-this is an expensive shot of Irish whiskey (especially right next to Pike Place Market), but your taste buds will tell you that the money is well spent (although when you look at the receipt later in the day you may have some buyer's remorse pangs). 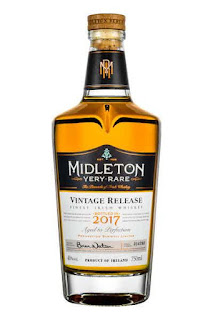 After lunch, I was hobbling my way down the street about a block from the Pike Place Market (Jeannie patiently keeping pace with me), and while passing a Target store, I saw this vision of beauty in the window. 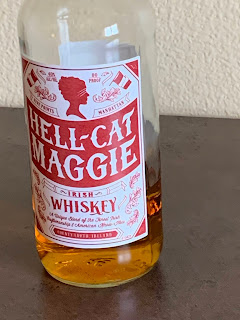 I told Jeannie I was going to pursue a relationship with this vixen, and went in (turns out the liquor store was not a part of Target) and bought the bottle.

Here is my theory. For decades, I kept a bottle of Jack Daniels in the house in the event of a toothache. Experience had taught me that JD did not really cure the toothache, but after a couple of shots, it did not seem to bother me as much. That logic worked the same way with pinched nerve paid-it was bad, and mostly manifested itself in my knee, but after a couple of nips at the bottle, I felt much better about the agonizing pain. I did not find out until a week later that I should have been taking a much stronger dose of anti-inflammatory, and the other passengers on the bus probably thought I may have had a bit of a drinking problem, but I was on vacation, so what the heck?

For the record, this is a basic bottle of whiskey ($20) and is in line with a $20 Jameson's bottle, very enjoyable. While I would not tell you to kill yourself trying to find it, if you came across it, I'd say it is worth picking up as a change of pace.

The whole point of this post is whiskey, so I am going gloss over how we got to Newport, OR, and just tell you that we did arrive in Newport on Monday afternoon.
At around 2:30, we had a choice to get on the bus and check into the hotel, then come back to town for dinner, or stay in town and kill a few hours until dinner.

Looking across the street, I saw a sign for the Rogue Bayfront Public House, and knew that Jeannie would enjoy trying their brews (our tour guide had mentioned their beer) so we opted to stay on the waterfront.

I had to hobble to the bar, stopping a few times on the two block walk (very humbling, this experience). Imagine my delight when we got inside and I learned that Rogue brewing also distilled spirits! 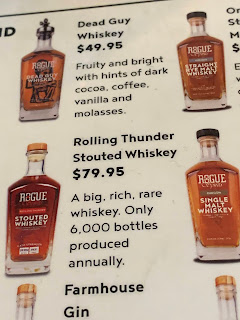 I had a flight with a sampling of four of their whiskies, and while I liked all four, I thought the Dead Guy  and Rolling Thunder Stouted whiskies were the best.  I had a full pour of each just to make sure-I want this blog to be accurate, you know.

While I say I could live in a pre-cell-phone world, it is handy to be able to do things like Google your hometown liquor store to see if they carry the whiskey you are drinking (they do), but I saw the bottle on display, and it looked cool, and I bought it just in case the bottles in the retail environment did not have the same cool topper/cork (if anyone knows the proper terminology, let me know). 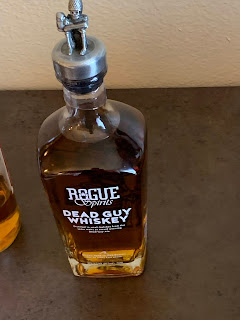 So now I had two bottles of whiskey on the bus...but this was only Monday, and I had put quite a dent in the bottle of Hellcat Maggies since Saturday afternoon...

Well we made out way down the Oregon coast, through the Redwood forests, and into San Francisco.

Our hotel bar had Pappy Van Winkle, but it was pricey and I still had some of the Rogue bottle to finish (having completed my liaison with Hellcat Maggie sometime on Wednesday) so I did not partake.

Somehow, by Friday night, I was able (with Jeannie's assistance) to finish the Rogue Dead Guy bottle, avoiding the issue of how to get a bottle of whiskey into luggage without it breaking. 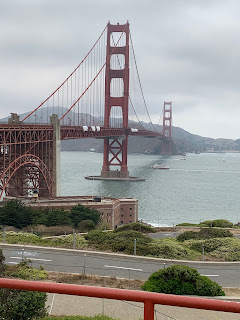 Saturday morning, we flew back to Phoenix. It has taken a couple of months, but the pinched nerve seems to be getting under control, and I have more whiskey adventures to blog about.