The music of the Beatles, a summer night and the Hollywood Bowl: a can’t-miss recipe, right?
As things turned out Friday, at the opening of a three-night “Beatles Celebration“ marking roughly the 45th anniversary of the Fab Four’s final Bowl appearances, this stuff isn’t remotely as easy as it may look, or sound.
There was no dearth of sweet memory, evocative melodies, poignant lyrics or variety of stylistic interpretation of the group’s catalog from soloists Patti Austin, Todd Rundgren, Bettye LaVette, Rob Laufer and Brian Stokes Mitchell.
But the music truly came alive only sporadically, primarily in the 2-1/2-hour show’s second half with LaVette’s dynamic, soul-searing set and Rundgren’s appearance that finally acknowledged the fun that was central to what the Beatles were about.
Until then, it was more of a Beatles appreciation than celebration, containing little of the youthful exuberance of the band’s early songs, or the anything-goes experimental glee of its latter years. Too often the songs on the first half approached the “Rockabye Baby” series of albums that transform music of the rock era into soothing children’s lullabies...

...but then LaVette showed up and suddenly the music sizzled as it should. She funkified “We Can Work It Out” along the lines of Stevie Wonder's long-ago reworking and performed a Sinatra-style “Here, There and Everywhere.”
On “Blackbird,” which McCartney in recent years has described as his elegy to the civil rights movement, LaVette took it into a universe of her own, her shredded sandpaper voice wringing every drop of struggle in this trenchant ode to anyone who has slain demons, within or without. And Lennon surely would have delighted in her sassy take on “Come Together,” for which she challenged anyone in the audience to explain his stream-of-consciousness lyrics.
With Rundgren at last came some larger-than-life rock ‘n’ roll. He strolled grandly onstage as the band cranked up the calliope-inspired sounds of “Being for the Benefit of Mr. Kite,” the singer outfitted in an appropriately outsized top hat, fake walrus (nice allusion, Todd) mustache, black waistcoat, white gloves and white spats. 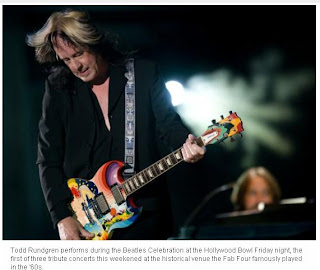 He helped the dutiful rock band that supplemented the orchestra amp up the show’s electricity quotient with “Everybody’s Got Something to Hide Except for Me and My Monkey,” and served as the Eric Clapton surrogate in “While My Guitar Gently Weeps,” which he preceded with a nod to Ringo Starr’s momentous 70th birthday -- a Beatle is 70?-- just two nights earlier.
His performance of “A Day in the Life” was the night’s most faithful to the original, the orchestra delighting in swirling to the massive climax that producer George Martin cooked up for the conclusion of the “Sgt. Pepper’s” album backing 1967.
A predictable all-star finale paved the way for audience sing-alongs on “Hey Jude” and “All You Need Is Love.” Fans in their 50s, 60s and 70s, many of them with children and even grandchildren in tow, waved arms, fired up lighters and cellphone screens ceremonially while beaming smiles and shedding the occasional tear.
Given this was the Hollywood Bowl, where the Fab Four had torn things up so raucously nearly a half century ago, at least one fan wished this celebration had traded some of the earnest camaraderie for more of the freewheeling spirit that has endeared the Beatles and their music to generation after generation.
Perhaps they figured, possibly correctly, that since McCartney did just that so well a couple of months ago under the very same orchestra shell, why try to compete? But a Hollywood Bowl celebration for the Beatles with no “Twist and Shout”? No “She Loves You”? No “Can’t Buy Me Love”? A hard day’s night, indeed.

For the full article, go here