Is it that the networks need to fill up the time, or are Americans so interested in the mundane that we watch the same plotline unfold three years running.

There’s something less than manly about a man who is so insecure, he would use the same feeble attempt at garnering media attention three years in a row. But what does that say about the American primates who are glued to their TV sets and iPhones and news rags wondering whether the Most Overrated Quarterback To Ever Hold A Football has retired?

Haven’t we been here before?

On March 6, 2008, the girlie-man in question retired. Remember? He cried like a baby and retired.

But his ego would not let him end his career on an interception (as so many of his seasons had ended, since he makes a lot of bad decisions to compensate for not being that good of a quarterback).

The during the month of July, the bed-wetter orchestrated a media circus in an attempt to get released. What he got himself was traded to the Jets.

Guess what? Three picks in his last game! No playoffs!

And next year, it’s the same old story. Retirement, media circus, almost-daily press conferences, and a last-minute arrival at training camp just in time to sign some autographs and pack up to go home.

Guess what? A pick in overtime ends his season!

Here we are again, with a media circus orchestrated by this wuss texting teammates to say he’s retiring, and then denying it. I am in my second annual ESPN ban, as I refuse to watch the same news stories for three years in a row. This is so repetitive, it feels like everyone is just pulling out three-year-old copy and reprinting it.

Please-can we all agree that we’re sick of news coverage on this guy? 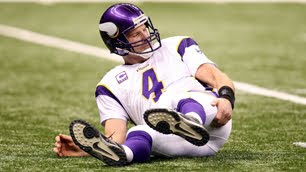 What does all this have to do with music? Good point. But they do play Todd Rundgren's "Band The Drum All Day" at Packer's games when they score a touchdown. So in a "Six Degrees Of Separation" frame of this is a music post...
I agree-I'm reaching.