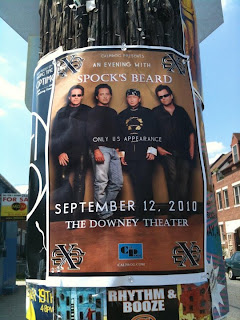 Well it was back on the road, this time to Downey (California) for the premeire of the Spock's Beard tour.
Long time proggers Spock's Beard have recently released their 10th studio album, appropriately titled "X", to critical acclaim, and are launching a European tour in support of it, but due to economic factors were not planning any shows in the US. CalProg could not let that happen, arranged for the Beard to launch the tour from the stage in Downey.

Since the show was in California, and since we seemed to both share an affinity for progressive music, I decided at the last minute to send off an e-mail to Arlee Bird of "Tossing It Out" fame asking him if he was anywhere near Downey and if so, would he be interested in seeing the show. To my surprise, when the trusty Pontiac Sunfire rolled into the parking lot of the Downey theater (without any mechanical complication on the six hour drive), I had a couple of messages from Arlee, so we arranged to meet.

Arlee met me about an hour before the show (and hopefully did not mind that I scarfed a sandwich in front of him). Just like his blog persona, he is the nicest chap you'd want to meet. I was a litte concerned he might not like the show, but he appeared to enjoy it (the band are all excellent musicians and seem to enjoy themselves on stage). 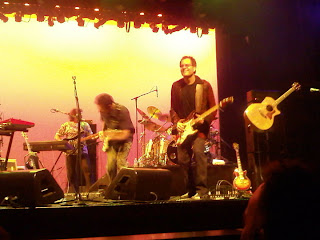 Alan Morse was prowling the lobby before the show. As some of you may remember, I drove out for the Beard CD release party in May, and Alan asked me, "Are you insane?"

When I pointed out I'd driven from Phoenix for the show, he quipped, "You're still insane!"

Hardly. These guys get the second most CD spins in my players (after Todd) and they've not played Phoenix in eleven years. So what's a few hours in the car? After the show the band graciously signed CD's etc (even though they were leaving early in the morning for Europe. For the four hundred or so fans in attendance, this was a real treat. For any prog fans in the LA area who did not attend-shame on you! If we don't support live music, all we're going to be left with is Lady GaGa!

I've posted a setlist below. They played the entire new CD, plus some old favorites. Amazon shows that they'll have the new disc in stock at the end of September-any prog fans should get the disc (or buy it now from the band site http://www.spocksbeard.com/).

They can use the support, and the album deserves to be heard-it's really that good! 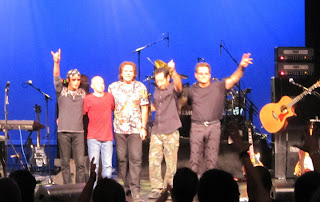 Encore:
On a Perfect Day
Thoughts
The Doorway
June