MEET ME IN THE MIDDLE OF THE NIGHT

STEVE FORBERT
"GET YOUR MOTOR RUNNING" 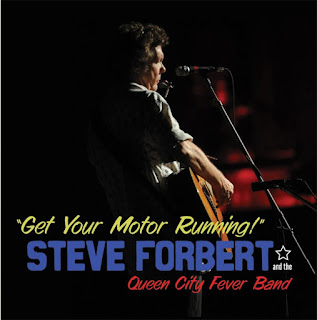 Although I will be posting a review for Steve Forbert’s Sept. 11th release of Over with You, his first studio album in three years, I just listened to Steve’s new live album, Get Your Motor Running and wanted to put a quick mention of it out here for any fans who might not be aware of it.


The album, recorded at The Temple Theater in Meridian, MS., is so far available only from Steve’s website.
Those of us who follow Forbert know that live albums from the singer are nothing new. Steve often releases solo concert performances either via compact disc or download, and often treats fans to occasional free downloads throughout the year.
Any live album from Forbert takes you places the studio albums do not go, and Get Your Motor Running is no exception.
While many of Steve’s performances feature only his unique voice, reliable guitar and trusty harmonica, here Forbert shares the spotlight with The Queen City Fever Band (Clay Barnes, Lead Guitar/Clay Ames, Bass/Adam Box, Drums).
As one might expect, this union brings new life to Forbert’s songs. The arrangements of Forbert’s songs in this full band setting are natural, not forced, and the performances give the impression that this is how the songs were originally conceived, although in some cases this is actually how they evolved over the years.
You would think this was a band that has been playing together for decades, and you will find yourself tapping your toe along with Forbert and band, as they bring some old favorites back to life while keeping the heart and soul of each song intact.
There are some interestingly arranged cover songs (“Born To Be Wild” and “Heartbreak Hotel”), and on both tunes, Forbert reworks these songs into Americana gems, giving them his own unique style and sound.
Fans who only remember the late seventies and early eighties classics (“Goin’ Down To Laurel,” “Romeo’s Tune”) may want to give this a listen as well as look for the new studio effort.


GOIN' DOWN TO LAUREL