RAGE AGAINST THE DYING OF THE LIGHT 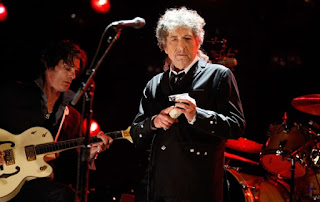 Bob Dylan is considering a Dylan Thomas tribute show in Wales to celebrate the 100th birthday of the late Welsh poet, Reuters reports.

Geraint Davies, the West Swansea member of Parliament, has asked Dylan to perform in Swansea next year as part of a series of commemorative events.

"Bob Dylan named himself after Dylan Thomas. I have asked Bob Dylan whether he would be prepared to give a centenary concert in Swansea, in order that he could blend his music with Dylan Thomas's poetry," Davies said in Parliament.

"Sony Music has come back and said that Mr. Dylan is thinking very positively about the idea."

One popular belief is that he named himself after the Welsh poet, but another theory suggests his namesake stems from Marshal Matt Dillon from Gunsmoke.

Dylan Thomas, best known for works like "Do Not Go Gentle Into That Good Night" and Under Milk Wood, was born in Swansea in 1914 and died in New York in 1953.