IS THERE AN ECHO IN HERE?

I know Stephen T. McCarthy will object to this post because it's discussing an Amazon product, but the technology is really quite remarkable. 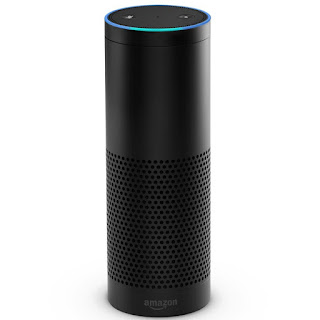 After initially debuting as an invite-only beta-gadget for $99 (I was one of the lucky ones who bought in at that price), the Amazon Echo now retails for nearly twice that: $180.

I had been in the process of storing my music collection in cloud space that I lease from Amazon ($25 a year for up to 250,000 songs-and I will use all 250,000). I was using my Andriod phone to stream the music to a Bluetooth speaker at work, and the Amazon music app on an Android device leaves a lot to be desired (very slow and cumbersome).

The Alexa app on the same phone SCREAMS. You want to play a record in your library? You search, hit play, and it plays. I found that not just to show it off, I was using the Echo to play music for company since it was a lot faster than going up to the CD room and going through the shelves.

The device does a lot of other things, from ordering products (Amazon and others, including Dominos pizza) at a voice command, turning house lights on and off, opening your garage door and more (you need to buy wi-fi compatible products for your home for lights, etc to work via Echo).

I mostly use it to play music. As I stumble out of my bedroom in the morning, I say "Alexa, play Todd Rundgren" and it starts playing.

In fact, my only criticism to Amazon on the device has been to add a couple of wake up words other than Alexa.

Bob Lefsetz has been publishing his daily newsletter with insights into the music business for more than a quarter century. When the Echo was introduced, Mr. Lefsetz had this to say (From the Lefsetz Letter, 6/25/2015):

We thought Jeff Bezos might be the new Steve Jobs. The Fire Phone proved otherwise. Amazon throws half-baked products at the consumer. And now we have the imperfect Echo.
Not high praise, and my initial reaction was that since his blog seemed to indicate he was an Apple disciple, it may have just been that the product was from a different cult. But I also wondered whether he had tried the device or was basing this on other reviews.

The device was rated pretty favorably across the board-in fact, a site devoted to Apple had this to say (full review HERE):


We’ve all seen how great it is talking to the computer in Star Trek…the computer understands everything you say and never does anything dumb.


Then there’s Siri, which often works but when she doesn’t, she puts you in a murderous rage.


Now there’s Amazon Echo, a nine-inch black cylinder that you can command to do certain things, like play music, set alarms, and announce sports scores.


“What is the weather today?” you ask; or “Order more Nespresso coffee capsules.”


So far, it’s understood just about everything I’ve said, and acted accordingly. It’s a strange thing to tell a computer to do something, and it does it every time.
At the moment, Echo is an odd duck product. It doesn’t do much that’s terribly useful, but it’s a glimpse of the future voice-connected home, and it works a lot better than you’d expect.


Earlier this year, CNet had this to say (full review HERE)


And even Mr. Lefsetz has come around, as he recently posted all about his Echo (from the Lefsetz Letter, 5/17/2016):

Alexa gets it right.


The Echo came with almost no instructions. Simple packaging. Not a work of art, like Jobs’s creations, but far from the old Microsoft where there’s so much info you’re inundated.


And then the lights started to swirl and I hooked it up to the wifi and Alexa was alive.


But she wasn’t loud enough.


A little research told me to twist her dial. Maybe that’s what the remote is for, the one that no longer is included because most people don’t use it.


And after asking Alexa a few questions, I hooked up my Spotify account.


Credit the Swedish streaming company. They’re horrible marketers, but great technologists. They’re on the Alexa bandwagon early.  You can’t use Spotify with Echo unless you have premium.


Alexa cuts out a step. Before the Echo, you had to think of a track and then find it, click it and play it.
But now… You just say the name of the track and act, tell Alexa you want to hear it via Spotify, and she cues it right up. 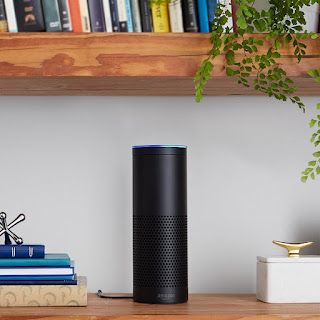 It seems to be pretty mainstream now, available at Best Buy, QVC and Bed Bath and Beyond.

Mr. Lefsetz made a Spotify believer out of me-I have the premium service, and it is starting to curb my addictive music spending. If I did not already have an entire room filled with CD's, I would not start now-with Spotify you can pretty much listen to what you want, when you want.

Echo is a high quality Bluetooth speaker, but if you are not an Amazon Prime user, it may not be for you. A lot of the convenience for me comes from the fact that all my music is on an Amazon server. The Bose Soundlink Bluetooth speaker that retails for the same price as an Echo does not have voice control but has better sound, and if you are just streaming Spotify, it may be a better option.


Amazon has introduced a portable Bluetooth speaker that has some Alexa voice functionality at a lower price-but that is a topic for a future post.

Now no matter what you think of Amazon the retailer, for any of you who are of a similar vintage to me, could your teenage self, as he picked him or herself off of the couch to turn the record over, have imagined this kind of technology would appear in his or her lifetime?