Somehow I missed this last week... 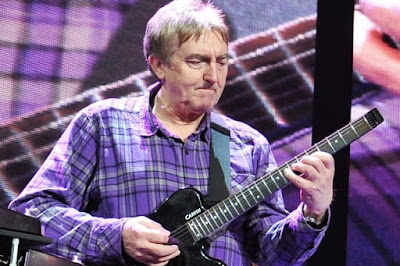 Allan Holdsworth, a self-taught guitarist whose protean, virtuosic style was a source of amazement even to his more famous peers, died of a heart attack on Saturday at his home in Vista, Calif. He was 70.

Mr. Holdsworth forged a relentlessly exploratory approach to harmony, which he brought to bear on both the guitar and the SynthAxe, a guitarlike synthesizer that allowed him added control over his tone and flow. He had his own vocabulary of unorthodox chords, often involving far reaches across the fretboard. As a soloist, he executed lightning-fast melodies with remarkable fluidity.

Mr. Holdsworth played in a number of seminal ensembles throughout the 1970s, including the Tony Williams Lifetime, Soft Machine and U.K., but he never seemed to arrive at any band’s moment of peak popularity, or to stick around long enough to accrue a major following.

Sadly, Mr. Holdsworth’s financial situation was not good at the time of his death, but a crowdfunding campaign to cover pioneering guitarist Allan Holdsworth‘s funeral expenses has been closed after just three days, with thousands of fans chipping in to raise nearly six times the target amount.

A family friend sought to help defray the looming financial burden of laying him to rest by launching a GoFundMe campaign asking for $20,000. That goal was met within hours; by the time it hit the three-day mark, more than $114,000 had come in.

Understandably overwhelmed, Holdsworth’s children Louise, Emily, and Sam have passed along a message to fans, writing that in the midst of the “never-ending nightmare” of their father’s passing, they’ve been overcome with “emotions and gratitude” in response to the campaign. “Without all of the love and support we have received we would be completely lost,” reads the note. “We are doing our best to fulfill the wishes of our beloved father.”

Adding that they plan to put together a public memorial for Holdsworth after laying him to rest in a private ceremony, the message thanks donors for “the huge stress that has been lifted from our shoulders” and notes their reasons for ending the campaign early, concluding, “We have decided, as a family, to close the GoFundMe campaign. It has more than exceeded its purpose. We cannot express our gratitude to you all enough, it has been overwhelming.”

Holdsworth fans who still want to make a contribution in his honor are urged to donate to their local pitbull rescue organization.

As the Holdsworth children joked, “We often teased him that Daisy, our pit mix, was actually his favorite child.”