JOHN MELLENCAMP "NO BETTER THAN THIS"

With "No Better Than This" John Mellencamp deepens the rich, intimate simplicity of his last record, focusing on strong song craft.

Recorded in mono, the album is disarmingly warm and inviting, giving the songs room to breathe with lo-fi, unadorned arrangements. T-Bone Burnett once again takes up production duties.

This is not an album that will ship a million records, but it is ripe for an audience looking for hearty Americana. 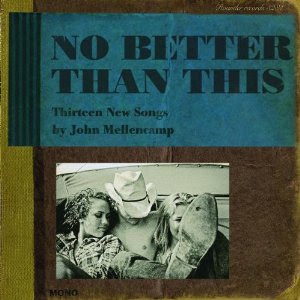 As time marches on, Mellencamp has become something of a retrospective malcontent as his sixties creep up on him.

He still harbors the restless spirit of a much younger man, calling out for social justice and pondering life's big questions straightforwardly. He proves himself a first-rate poet as he magnifies the vicious circle - the "broken promises" - that keep the oppressed immobile in contemporary society.

Mellencamp waxes poetic on finding euphoria in life's most affirming moments in the upbeat title track and lead single, even though a bittersweet sense of urgency peaks out through the song's sunny surface.

Mellencamp remains thoroughly and remarkably engaging throughout, "No Better Than This." He writes story songs that immediately grab and speak to people of all walks of life- the essence of American music.