UP ALL NIGHT LISTENING TO DARWIN'S RADIO 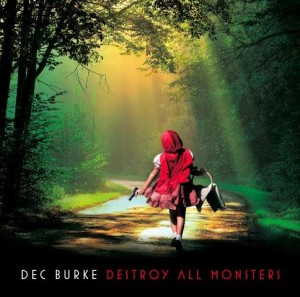 Dec Burke is a UK based guitarist/vocalist who has previously written recorded and performed with Frost* and Darwin's Radio. After leaving Darwin's Radio in late 2009, Dec embarked on this new solo project.

While I wouldn't call Destroy All Monsters a prog record, the influences are there, and the album bears more than a passing resemblance to Burke's work with Darwin's Radio. Burke has come up with some pretty good tunes for his first time at bat.

Burke has a solid voice and is a talented instrumentalist. Playing guitar, keyboards and supplying vocals himself, Burke delivers an element of restraint not exhibited on Darwin's Radio releases. He showcases talent as an arranger, with huge bass pedals, programmed beats and fantastic choruses with songs drenched in orchestral keyboards.

The production is dense yet never muddled, and Burke’s breathy vocals suit the material and carry the emotion of the lyrics extremely well. The atmosphere calls to mind Porcupine Tree during their laid back moments.