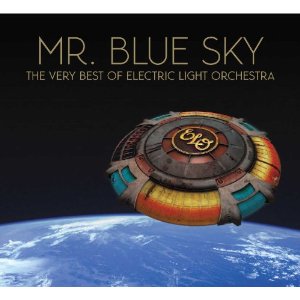 Formed in 1970 by former Move members Roy Wood, Bev Bevan and Jeff Lynne, Electric Light Orchestra (ELO) were one of the biggest selling groups of the 70s and 80s.

The record label (Frontiers) and Jeff Lynne will try to get consumers to believe that Mr. Blue Sky The Very Best of Electric Light Orchestra, featuring newly recorded versions of ELO's decades-old hits, is a powerful new testament to ELO's enduring legacy, reflecting Lynne's singular desire to get things right once and for all.

The sordid truth is probably that, like many other artists of decades past, he re-did these songs, probably to garner some royalties from them when used in commercials and movies.

Lynne, always the driving force behind ELO, has artfully revisited and re-recorded their greatest hits and actually improved on some of them, a kind of showdown (song title reference not accidental) between the Jeff Lynne of today and his extremely illustrious past.

Even with improved technology and recording artistry, I do not know that there is enough "new" here to warrant the average fan buying another compilation if they already own one of the several greatest hits albums that feature the original band line-up. Die hards will want this for "Point Of No Return," the lone new song.

Is it misleading to call this an ELO album? Is Jeff Lynne ELO? I think you'll find fans on both sides of the argument. I don't know the answer-obviously I bought the album and do not regret it, although I am far more interested in Lynne's forthcoming solo album featuring all-new material.

POINT OF NO RETURN