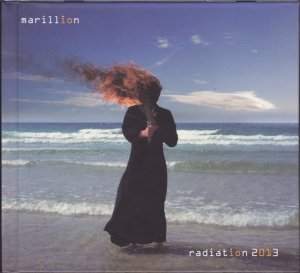 P.T. Barnum might not have envisioned CD re-releases with one or two bonus tracks to get me to repurchase a CD a few times (how about FOUR copies of most Todd Rundgren CD's?!), but he knew one of me was born every minute.

Most of the time, album remixes do not wow me. The discs are simply usually not noticeably different to my ears.

I was a fan of the original Radiation album, although there was something about the mix I never liked. It seemed I could play "These Chains" turned up to "11" on a Spinal Tap stereo and still have trouble hearing the vocals.

Still, while I liked the album more than Brave, I was actually glad when I found out that the band did not like it either. While they went for a modern sound, it was a heavier, noise-saturated mix that seemed to onkly resonate with me.

I have been picking up the Madfish remasters in deluxe packaging, and most have been more for the enhanced packaging.

Right off the bat, the vocals are moved up in the mix so they are loud and clear. The songs seem to have more sounds in them, but the mix does not bring them across as overpowering-I am hearing lots of new things with each listen!

On a couple of songs, the clearer mix takes some of the original charm away, which is why this feels like a new album. I do not see this replacing the original Radiation, which is included here on a second disc, but as an album in its own right that will continue to get rotation time.

The band always said it didn’t come out the way they initially heard it, and always had hopes to remix it one day. Now 15 years after its release, Radiation 2013 gets that fresh remix the band had always talked about.


I was unable to find clips from the remixed album, so the following songs are from the original disc. Since most readers will not have heard either, this will give you a flavor for the album.