Today is the day Arlee Bird gets roasted as this year's Cheersfest victim...er...honoree. 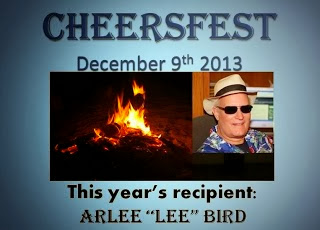 On his main blog, “Tossing It Out,” Lee describes himself, in part, “as a writer, speaker, entertainer, music lover, collector, husband, father, grandfather, friend, traveler, seeker of truth and wisdom.”

It is a little known fact that the first prescription issued on Venice Beach for medicinal marijuana was given to Arlee Bird.

He majored in alternative uses for pipes...um..herbal studies...er, that is,  English while at the University of Tennessee.

Arlee has blogged since 2008, and currently has six blogs that delve into his diabolical...er...um...diverse mind.

Come on-you've read his blog about dreams-this guy is further out there than Cheech and Chong!

Why do you think he lives in California and goes to a pharmacy on Venice Beach?

I kid Lee, of course. Lee has the unfortunante (for him) distinction of being the only person in the blog world I've met face-to-face (besides Stephen T. McCarthy, and that doesn't really count since I'd known him for a decade prior to blogging).

So enough with my introduction. There were some assignments for this post, so let's get to them.

Why did Lee come up with the A-Z Challenge?

Were you not paying attention earlier when I made my Cheech and Chong joke?

Obviously because he’d smoked some ganja and looked at a calendar.

How else would you come to the conclusion that if you discounted Sundays, April would have the same number of days as letters of the alphabet?

If someone dreams about being a juggler, what does it mean?

With six blogs, I think we are seeing the living embodiment of what it means.

In fact, with six blogs, I think Mr. Bird may need to seek out a support group.

"Hello,my name is Arlee, and I am a blogaholic."

The first step is admitting you have a problem...

Is a post by Mr. Bird worth two in the bush?

That’s just silly-how would you get two posts in the bush in
the first place?

A better question to ask is, what was he smoking before that last post and where can I get some?

Who could play Lee in a documentary? (Living or dead.)

If I were casting the Lee in the juggling picture, I am thinking Rob Reiner back in the All In The Family days.

In +/- 100 words, (excluding the title) write flash fiction using
all these prompts:

The chainsaw juggler took off his brown jacket and readied
himself for his act.

A crowd had started to gather on the Venice Beach
promenade.

He grinned as he started up the power tools, enjoying the
challenge that this provided-anyone could juggle balls
safely, but one false move with a chainsaw and you’d be
called Lefty for the rest of your days.

Tossing the chainsaws in the air, he began to manipulate the heavy objects to keep all three in the air while the onlookers dropped change and small bills into the bucket he’d set out.

At one point, a seagull swooped down, one of the chainsaws narrowly missing the bird.

He smiled to himself-today was looking like a profitable day.

In +/- 40 words, can you come up with a caption for Lee’s Facebook picture? 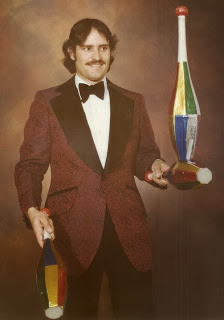 Arch-why must you always call me Meathead?

Lee-here' to ya, my friend! Sorry about all the stoner jokes....but it is a roast!