YOUR WISE MAN DON'T KNOW HOW IT FEELS


IAN ANDERSON "THICK AS A BRICK 2" 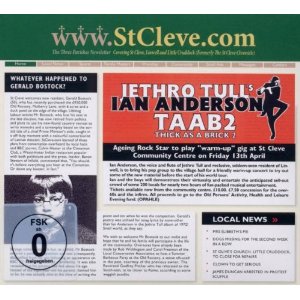 In 1972, Ian Anderson wrote and recorded the Jethro Tull Progressive Rock classic album Thick As A Brick . The lyrics were credited at the time to the fictitious child character, Gerald Bostock, whose parents supposedly lied about his age to enter him in a poetry contest. The record instantly became a number one Billboard Chart album and enjoyed considerable success in many countries of the world.

So, forty years on, what would Gerald Bostock aged fifty in 2012 be doing today? What might have befallen him?
The anniversary part two album will examine the possible different paths that the precocious young schoolboy, Gerald Bostock, might have taken later in life through alter-ego characters with song-section identities illustrating the hugely varied potential twists and turns of fate and opportunity.
Not just for Gerald but to echo how our own lives develop, change direction and ultimately conclude through chance encounters and interventions, however tiny and insignificant they might seem at the time.
This is a hard album to review in any objective way. Most people who are likely to buy the album are also likely to think it should have never been made in the first place. However seeing as it actually HAS been made, the main question that people should be asking is how good is it?

In my opinion it is actually pretty good, but only if you allow yourself to get really objective about it. It in no way lives up to its predecessor,  a beloved classic of the genre, that doesn't really need a sequel both because it worked on its own and because it was a deliberate send up of concept albums themselves. But then no one realistically expected it to.

With moments energetic and heavy, there is a mixture between tasteful moments, humour and whimsical silliness and a lot of flute work. Structurally, the album does not follow the same formula as the original album, specifically it isn't just one giant song from start to finish, although as it is still a concept album it does flow together a bit more than just a standard album would.

Overall; if just being related to the original Thick As A Brick isn't enough for you, or if you don't feel too upset about the lack of Martin Barre, then by all means give it a shot.


MAKING OF THICK AS A BRICK 2

THICK AS A BRICK 2 (excerpt live)

THICK AS A BRICK 2