JOHNNY SANSONE-THE LORD IS WAITING AND THE DEVIL IS TOO 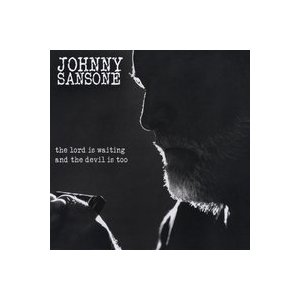 In the wrong hands, the blues can become too much of a cliché, but in the right hands, the artist is able to tap into something elemental.


The latter is the case with Johnny Sansone's The Lord Is Waiting And The Devil Is Too-the album’s themes demonstrate his understanding of the world's dark side and the eternal struggle to find the light of salvation. The ten tracks provide a raw look at life near the crossroads, where the choices one makes shape the future for a long time to come.

Sansone teams up with Anders Osborne (producer, guitar, background vocals and other instruments including cowbell, which there probably needs to be more of) and drummer Stanton Moore, compiling ten stripped down and disturbing songs that initially seem too dark and primal for casual listening, but if you stick with it, the album’s songs paint pictures of characters who are at once fragile and strong and how circumstances make them do desperate things.


Musically, the album goes from a raucous New Orleans romp to slow-cooked blues, with Osborne’s production creating space for Sansone’s growl and harmonica, foregoing a bass guitar, resulting in lean and hard arrangements.
The mix showcases Sansone’s excellent harp playing skills, equally adept at both diatonic and chromatic and willing to get dirty with them when appropriate. The harp rips and shreds when it takes center stage-on one instrumental (“Corn Whiskey”), his harp has the aggression of a bare knuckle punch, at times feeling like a frenzied guitar feedback solo, at others literally criying the blues.
The lyrics set the album’s tone, with bleak imagery and undertones of menace-it is probably for the best that Sansone get this stuff out of his system, and we all get the benefit of his exorcism.


This is blues-influenced roots-rock at its finest, and sadly the record seemed to come and go without getting its due.