A FINAL WALK ON THE WILD SIDE

(post was delayed to give readers a chance to find the Bromberg CD review, so this may not be news anymore...)

Lou Reed died Monday in Southampton, N.Y. of an ailment related to his recent liver transplant, according to his literary agent, Andrew Wylie, who added that Reed had been in frail health for months. Reed shared a home in Southampton with his wife and fellow musician, Laurie Anderson, whom he married in 2008. 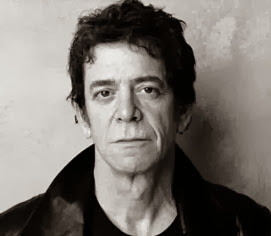 Reed never approached the commercial success of such superstars as the Beatles and Bob Dylan, but no songwriter to emerge after Dylan so radically expanded the territory of rock lyrics. Indie rock essentially begins in the 1960s with Reed and the Velvet Undergrounds; the punk, New Wave and alternative rock movements of the 1970s, '80s and '90s were all indebted to Reed, whose songs were covered by R.E.M., Nirvana, Patti Smith and countless others.

"The first Velvet Underground record sold 30,000 copies in the first five years," Brian Eno, who produced albums by Roxy Music and Talking Heads among others, once said. "I think everyone who bought one of those 30,000 copies started a band!"

Reed's trademarks were a monotone of surprising emotional range and power; slashing, grinding guitar; and lyrics that were complex, yet conversational, designed to make you feel as if Reed were seated next to you.

Known for his cold stare and gaunt features, he was a cynic and a seeker who seemed to embody downtown Manhattan culture of the 1960s and '70s and was as essential a New York artist as Martin Scorsese or Woody Allen. Reed's New York was a jaded city of drag queens, drug addicts and violence, but it was also as wondrous as any Allen comedy, with so many of Reed's songs explorations of right and wrong and quests for transcendence.

He had one top 20 hit, "Walk On the Wild Side," and many other songs that became standards among his admirers, from "Heroin" and "Sweet Jane" to "Pale Blue Eyes" and "All Tomorrow's Parties."

An outlaw in his early years, Reed would eventually perform at the White House, have his writing published in The New Yorker, be featured by PBS in an "American Masters" documentary and win a Grammy in 1999 for Best Long Form Music Video.

WALK ON THE WILD SIDE