THE RETURN OF THE MAD VIOLIN MAKER 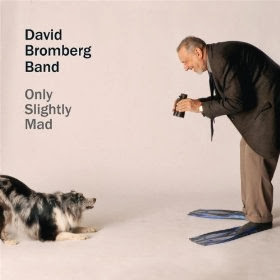 David Bromberg has been around the folk and  blues scene since the 1960’s, when he played guitar for Jerry Jeff Walker.

He was a staple at the Philly Folk Festival after he started releasing albums of his own, although his first Grammy nomination did not come until 2008. He has also performed and recorded with such names and Bob Dylan, George Harrison, Ringo Starr and jerry Garcia.

Bromberg took a sabbatical from the recording biz between 1989 and 2007, and learned the craft of violin making (he has a shop in WIlmington, Delaware).

Luckily, independent Pennsylvania-based label Appleseed Records brought him back to the shelves (or at least to internet sites).

Only Slightly Mad is his third release since his return, following the Grammy-nominated Try Me One More Time and 2011’s critically acclaimed Use Me.

Simply put, this may his best album to date, with a brilliant choice of material in a wide variety of styles.

The CD includes more than an hour of top notch performances, and for those with better eyesight than me, song-by-song commentary from David on the CD digipak.

Bromberg takes you from the deep blues of “I'll Take You Back,” the old time blues of Keep On Drinkin, to the bluegrass of the Stanley Brothers’ “The Fields Have Turned Brown.”

The musicianship is top notch, and Larry Campbell’s production at Levon Helms' old studio brings out a little bit of everything in a lot of styles-in other words, the same recipe that made his old Fantasy albums so great.

Other albums may have songs that are as good, but every song on this release is great, with my highlight being “I’ll Take You Back” with all of its tongue-in-cheek sarcasm.

If this is not his best album, it certainly has to be in the discussion.

A must own for any fan, and a great place to start for someone unfamiliar with his past work.

I'LL TAKE YOU BACK (live)

NOBODY'S FAULT BUT MINE