BABY LET'S DO THE MICHIGAN RAG

I accidentally purchased a Leon Redbone CD I already had, so I lent it to my good friend Stephen T. McCarthy.

Stephen was not interested in the CD, but after listening hypothesized that Leon was inspired by Tiny Tim. Those of you who follow Stephen's blog may recall his annual Christmas posts regarding the pop culture icon who gave the world "Tiptoe Through The Tulips."


Keep in mind that Stephen also feels that Metallica was inspired by Tiny Tim, and take the comment with a grain of salt.

This seemed like a good time to revisit Redbone's Warner Brothers' debut, 1976's On The Track.

Carrying "very special thanks" to Jelly Roll Morton and Jimmie Rodgers, this album sounds like the offspring of the pioneering jazzman and the early hillbilly blues singer, with perhaps a bit of Bing Crosby thrown into the mix.


Aided by a small horn section (including a prominent tuba) and violin, the disc is an excellent collection of music from the 1920s and 30s, brought back to life by a talented and eccentric artist.

Leon Redbone made his career in the Toronto club scene in the early 1970's specializing in interpretations of early 20th-century music, including jazz and blues standards and Tin Pan Alley classics. Recognized for his trademark Panama hat, dark sunglasses, and bow tie, Redbone has a sizable cult following. His concerts blend performance, comedy, and skilled instrumentals, and he was once cited by Bob Dylan as the first performer he'd want to sign to his own label.

Redbone croons and growls his way through a repertoire of standards , making no attempt to modernize these songs, as artists in past decades have attempted to do, choosing instead to keep true to the Dixie, Delta blues and ragtime jazz styles that made these songs popular to begin with. His version of "Ain't Misbehavin" would make Al Jolson beam with pride.

And on the cover, we are granted the image of Redbone's true inspiration.

Not Tiny Tim at all, Leon is channeling the spirit of Michigan J. Frog! 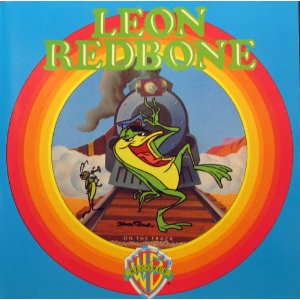