Sad news from  across the pond. 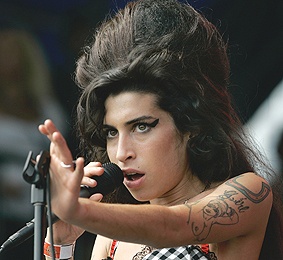 Amy Winehouse was found dead inside her London home Saturday morning, bringing to an early end a brief but brilliant run at the forefront of the British soul revival. The troubled star, who had struggled with drug and alcohol abuse in recent years, was 27.

Winehouse hit the U.S. mainstream in 2006 with "Rehab," a handclap-driven throwback to the golden age of soul that set the tone with "They tried to make me go to Rehab/I said 'No, no, no'/Yes, I've been black but when I come back you'll know, know, know."

That song's success drove sales of that year's "Back to Black" to double-platinum in the States, where Winehouse won five Grammys in 2008, including Song and Record of the Year for "Rehab," Best New Artist and Best Female Pop Vocal Performance.

"Back to Black" hit No. 2, its U.S. peak, on the strength of that Grammy exposure, but Winehouse has struggled to put her career back on track in the years since then, releasing no new music while becoming a fixture of the tabloids as she continued to struggle with personal demons.

Sadly, the demons won the struggle.