I have been meaning to post this since Friday... 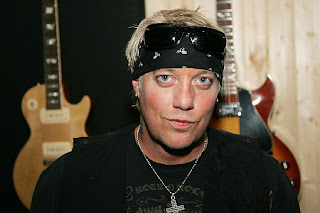 Jani Lane, front man of the popular 1980's band Warrant, was found dead in his room at the Comfort Inn hotel in Woodland Hills, California on Thursday, August 11. He was 47.

Born John Kennedy Oswald, in Akron, Ohio, Lane and Warrant rose to fame thanks to the hits "Down Boys," "Sometimes She Cries," and the band's 1989 signature power-balled smash, "Heaven" that reached No.2 on the Billboard charts and went all the way to No.1 on the Rolling Stone charts.

In the thick of the hair metal band craze that ruled the 1980's until the grunge movement of the 90s took over, Warrant packed stadiums all over the world and lived the dream of every kid that ever picked up a guitar or started a band.

Lane, who played guitar, piano and drums, was also far more skilled behind the mic than people realized as he penned the bulk of the band's songs and was clearly the driving creative force behind Warrant.

Sadly, friends, family and fans may never know what the cause of Lane's death was as the initial autopsy test conducted on Friday was deemed inconclusive.

Jani Lane left an enduring body of work that fans will always remember.