WE NEED A SIGNAL AT THIS INTERSECTION 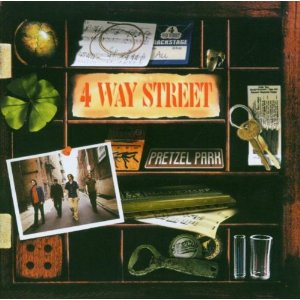 Four immensely talented and quite different performers from Philadelphia (Ben Arnold, Scott Bricklin, Jim Boggia and Joseph Parsons) have teamed up to form the folk rock band, 4 Way Street. All four have had individual success in past years recording and performing as soloists or leaders of their own groups.


Pretzel Park, the group’s 12 track debut release, showcases the vocal ability and flexibility of each of these men, evident in the rich harmonies heard throughout.

How does a gravelly sounding keyboard/guitarist (Ben), a guitar- wizard pure popster (Jim), a sweet-but-funk hammering bassist (Scott) and a classical-style guitarist with roots deep in European traditions (Joseph) all manage to write both collaborative and individual songs and make it sound like it was always meant to be? One need merely sit back and be swept away in wonder and delight.

The band members each contributed individual songs to the album, and in collaboration transformed them in an undeniable group effort. Three songs were composed as a collaborative entity that are a testament to their synergistic relationship. Together they created a musical synergy that is remarkable, memorable and downright infectious

Right from the jangly guitar stirrings of the opener, your attention is grabbed and you are not let down by the two-and-four part harmonies that await you along with catchy choruses that make every tune a potential single.

This album is one incredibly solid, delightful body of work that travels an entire spectrum of emotions, from despair to joy, touching on many others along the way and guaranteed leave any listener richer for the experience.