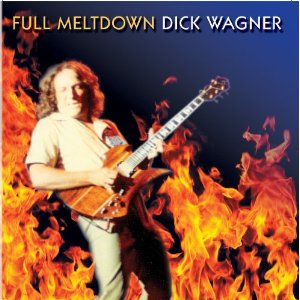 Dick Wagner has had an amazing career as the guitar player for Lou Reed and Alice Cooper. In addition he has recorded classic songs with Kiss and Aerosmith and written songs for artists as diverse as Meat Loaf and Air Supply.

Wagner’s discography is a Who’s Who of 70’s rock music, and his songs and lead guitar have been featured on more than 150 renowned albums.


Full Meltdown features 15 songs recorded by Wagner between 1979 and 1995 that demonstrate dazzling guitar virtuosity and an incredible sonic diversity, although Wagner’s masterful, howling guitar hallmark each piece, juxtaposed with lyrical beauty that is heart wrenching and soulful.

These songs will take you right back to your youth, and the innocence of driving down a fast highway with friends, carefree, wired, windows open, not giving a damn. Wagner gives the album a softer touch than I’d expected, but still demonstrates capability with a guitar and a voice that deserves to be heard.

More recently, Wagner was the man behind the console on the debut CD by Wensday, and while this effort might not match the power of that one, it is still a top-notch CD from a journeyman rocker that deserves a listen.