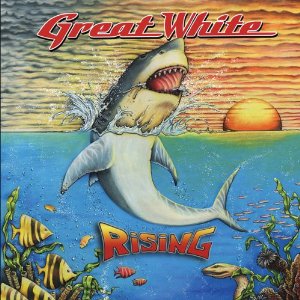 After signing to Frontiers Records, blues rockers Great White come back with their 11th studio album entitled Rising, a no-holds- barred, all original LP that is among their strongest releases to date. Their second studio recording in 10 years features 11 brilliant new compositions penned by the band.

Stylistically, Rising is very similar to their comeback album (2007's Back to the Rhythm), and finds the band emphasizing their laid-back, bluesy side rather than the kind of hard charging party rock that they built their reputation on in the 1980's. I love those 80's albums, but there's just something about this band's later sound that I find much more interesting.

There are a few rockers on Rising, like "Danger Zone", and "Shine" and "Loveless," but overall this is a pretty mellow album. The band seems comfortable and confident, and the result is a very mature, well written album. Melodic, moving songs like "I Don't Mind" and "Loveless" are as good as anything the band has recorded in a long time, and there are several other memorable songs on Rising that showcase Great White's knack for blues-based rock & roll.

They've been at this for more than 25 years, and have aged well. Great White fans that have stuck with the band over the years and have come to love their bluesy side should enjoy Rising. If you're looking for 80's nostalgia, this may not be for you.