Last year (2012), during the first weekend in June, Rundgren Radio's Doug and Melinda promoted the first two shows on American soil where Todd Rundgren played a career retrospective backed by a symphony orchestra (he'd done this twice before with the Metropole Orchestra in the Netherlands, said to be the largest full-time ensemble of it's kind in the world).

This time around it was the Rockville (Illinois) Symphony Orchestra, and you can bet I'd be there, right?

Sadly, my nephew picked that day to get married, and as much as I'd have loved to see the TR show, I wanted to attend a family event that was a happy one even more. And my sister would have never spoken to me again.

So when Rundgren Radio announced that the Akron Labor Day celebration was back after a two year absence, and that this year would bring another symphony show, I was stoked. 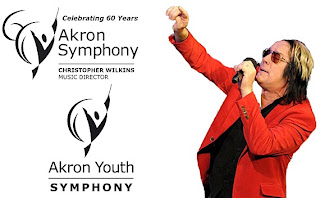 Doug and Mel do not skimp on organization, so the weekend was full of activity. Sadly for me, one thing that seemed different from the 09-10 weekends was that the people seemed to be more clique-ish, maybe because I'd not been to a weekend since 2010 and they were all pretty active on Facebook and, being from the Northeast, more likely to see each other at shows. I'd not made several Rundrgen Radio events due to job demands, and even some people who I remembered from the earlier weekends were polite, but keen to get together with people they knew better.

That said, a few people made me feel like I was not a leper, and it was still a great weekend. Lesson learned-figure out how to use Facebook.

Friday night we were treated to a show by the tribute band, Hermits Of Mink Halloween, who played for what had to be more than three hours (eight rum and cokes at one every twenty-four minutes....check my math). It was after three am when I stumbled to my room...

Saturday, I woke at the crack of noon and found breakfast.....and did little else. Saturday night was the show with the symphony, and it was really an experience.

I'd never seen a symphony before, and while some numbers featured the rock band and kind of drowned out the orchestra, there were quite a few that either were solely the orchestra, or featured enough of the orchestra that they added to the arrangement and it was quite special.

Todd did the charts for the orchestra-I wonder if that means he wrote the arrangement for every instrument (anyone know orchestras?). So while I wish the show could have been longer (only one song in addition to the Metropole show), considering his schedule this year (a new album and tour, a tour with Ringo Starr, a retrospective tour), I am not whining.


There were quite a few songs played that I had never seen performed live (and I've seen him fifty times, which makes me still an amateur by die-hard standards).

Sunday, I got out to check out a few local used CD stores. One store in particular, Time Traveler, had a few good finds, a proprietor who was a Todd fan (he was playing the "Todd" album when I walked in), and a nice selection of vinyl. If you're in the area, check it out!

Sunday night was the "Unpredictable Todd Rundgren" show in Kent. Kent is a cool little college town, and I wish I had made an effort to check it out Saturday-even if only to see what kind of used CD stores it had to offer. The show was in a small (670 seats) hall, with good sound, and the show was a standard set list from the last couple of years, but a welcome change after three "State" concerts (not complaining-the State shows were cool, but I was electronica-d out).

The symphony show spoiled me a little-I found myself wishing he'd forgo a few of the "hits" to dust off some old gems, but he did play a Johnson cover ("Kind Hearted Woman") and "Courage" from 2008's Arena, as well as a few songs from Liars.

I sat next to a gentleman who redefined die-hard. He'd driven in from Detroit for the Saturday show, driven back to Detroit to go to work, and driven back to Akron again for the Sunday show. He was new to Todd and making up for lost time, I guess!

Rundgren Radio arranged buses from the hotel to the shows (and to a lot of daytime events) so drinking and driving was not an issue, although I passed on drinking Sunday night (had to get up early to catch my flight).

Another great "Todd" weekend, and after the sad personal events of this year, a welcome trip.

To the member of the BeyondAwizard Yahoo group who said there was nothing to make it worth making the trip to Akron, all I can say is-you missed a heckuva weekend.