THE BABYS RETURN TO THE SUNSET STRIP 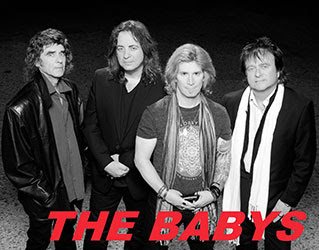 Three decades later, legendary classic-rock band The Babys return for a show on the Sunset Strip, the British group's adopted home when they burst upon the scene after signing with Chrysalis in the 1970s.

Having reformed this summer with original guitarist Wally Stocker and original drummer Tony Brock, The Babys headline the Roxy Theatre on Thursday, Sept. 19.

“It's going to be great to get back there. It will feel like home,” Stocker said. “I remember playing the Whisky for the last time on New Year's Eve in 1979, and there were so many people packed in that you couldn't even move. That was the last time we played the Sunset Strip.”

In the 1970s and early 80s, The Babys sold more than 15 million records and toured with Journey, Styx, Cheap Trick and others including a show before 80,000 at the Los Angeles Coliseum.

Former members John Waite, Jonathan Cain and Ricky Phillips have all gone on stardom. Waite had No. 1 singles with “Missing You” and again in Bad English with “When I See You Smile.” Cain joined Journey and penned a string of hit singles including “Don't Stop Believing,” the most downloaded song in history. Phillips is a longtime bass player for Styx.

In a remarkable comeback story, The Babys performed a benefit show to rave reviews in July before a capacity crowd at Canyon Club, about an hour north of Los Angeles – the group's first show in more than 30 years – and the band figures to be much stronger now that they've gotten their feet wet and been able to rehearse more.

The new members are John Bisaha, who sounds like John Waite and even looks a bit like him, along with ex-Buddy Miles guitarist J.P. Cervoni, roundly considered the No. 1 studio player in Los Angeles.

The Babys have five hit singles that are still played on the radio every day – “Isn't it Time,” “Head First,” “Midnight Rendez-Vous,”“Everytime I Think of You” and the irresistible “Back on My Feet Again” – and every one them is in the concert set.

The Babys have released one new song, “Not Ready to Say Goodbye,” which sounds exactly like a mix of several of their hits. Tickets for the Roxy performance are available through ticketfly for $22. For VIP packages, visit thebabysofficial.com. In concert, The Babys feature a side keyboardist and two female backup singers.

Wally Stocker, guitarist – A key force throughout The Babys' original rise to stardom, Stocker first left home in London at 15 with just a couple of pounds in his pocket and a guitar strapped to his back in pursuit of his rock and roll dreams, and he has never turned back. A favorite among Babys fans for his spell-binding guitar riffs that always played the spaces as well as the notes, Stocker went on to join Rod Stewart's band, then Air Supply, then Humble Pie.

Tony Brock, drummer – Strongly considered one of the best drummers in the world, Brock plays with a rare combination of feel and timing, combined with a preference to hit the drums just about as hard as possible. Post-Babys, Brock was a long-time member of Rod Stewart's band in addition to playing with Jeff Beck, Bernie Taupin and others. Eventually, Brock founded Sliver Dreams Studios (silverdreamsstudios.com) near Los Angeles, where he produced platinum records for Jimmy Barnes and a string of others.

John Bisaha, vocals/bass – Blessed with terrific rock voice that sounds about as close to one-of-a-kind Waite as you can get, relative unknown Bisaha proved an instant star at The Babys' first comeback performance in July. The first song was “Looking For Love,” and it took about 30 seconds for Bisaha to have the capacity crowd in the palm of his hand. He sings and looks great – a key development for the new Babys to succeed – and through the years Bisaha has made his mark in theatre and studio work. A natural born star.

J.P.Cervoni, guitar – Best known for his work with Buddy Miles (ex-Hendrix), Cervoni plays the guitar upside down just like Jimi. In fact, on stage he uses the same exact guitar head that used to belong to Mr. Hendrix himself. A guitar virtuoso in all things rock, Cervoni is the go-to guy in Los Angeles if you want something to sound perfect in the studio, and he also has extensive touring experience. Italian-born before finding his way to Los Angeles, Cervoni is a legend in the studio.