Many of you know I have a rather excessive obsession for music that has turned into a somewhat large collection.

A few years ago, in an effort to create more shel space, I undertook the project to remove the CD's from their jewel cases and place them in plastic sleeves.

I am up to the "R's" (but have spent little time on this recently).
Another project started last year was the uploading of the same collection to the cloud.

This would give me (finally) a backup in the event the physical CD's were damaged, as well as access to the collection through various internet-enabled devices (computers, cell phone, iPad/iPod) for streaming purposes.
Along the way, I am reminded of the titles I own that have not seen the light of day for some time.
In Stephen T. McCarthy’s second Battle Of The Bands post, he pits a Fleetwood Mac song against a cover by the Detroit band, The Rockets.


Today, while repackaging and uploading my CD collection, I came across albums from not one….not two…but THREE different bands calling themselves The Rockets.


These Rockets hail from Detroit, Michigan and were founded by guitarist Jimmy McCarty and drummer Johnny "Bee" Badanjek, both former members of the group Mitch Ryder & The Detroit Wheels.
Formed in 1972 along with slide and rhythm guitarist Dennis Robbins, bassist John Fraga, and lead vocalist David Gilbert, the Rockets reached their pinnacle of success in 1979 with a Top 40 hit, a cover of the Fleetwood Mac song "Oh Well." 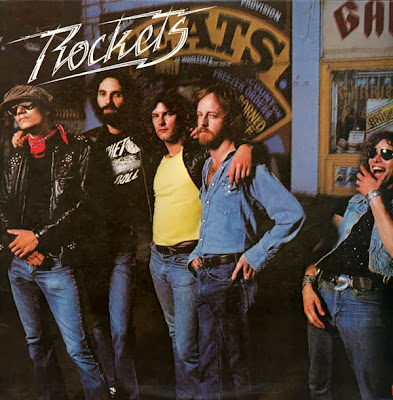 Some might argue that inclusion on the FFFF blog was the high water mark, but for purposes of this post, let's assume it was the Billboard charts.


The Rockets made five studio albums producing several minor hits. Always a popular group in Detroit, and Michigan, The Rockets had gotten some attention outside of the state, but never really got the big break to become a true national act. In 1983, the band splintered and the members all went their separate ways.


Sadly, three original members (David Gilbert, Bobby Neil Haralson and John Fraga) passed away over the past decade and a half. The surviving band members  revived the band in 2010 and are reportedly working on a new album.


Another band called The Rockets was an early incarnation of Crazy Horse, the band that would back up Neil Young for decades.


The band's origins date to 1963 and the Los Angeles-based a cappella doo-wop group Danny And The Memories, which consisted of main singer Danny Whitten and supporting vocalists Lou Bisbal (soon to be replaced by Bengiamino Rocco), Billy Talbot, and Ralph Molina. The latter two would become the only members of Crazy Horse present in every incarnation of the band.


Making its way to San Francisco and back to Los Angeles again, the group evolved over the course of several years into The Rockets, a psychedelic folk hybrid comprising Whitten on guitar, Talbot on bass, Molina on drums, Bobby Notkoff on violin, and brothers Leon and George Whitsell also on guitars. This lineup recorded the Rockets' only album, a self-titled set released in 1968. 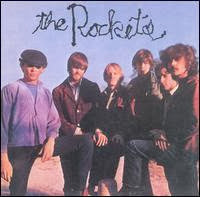 With their album complete, the Rockets reconnected with Neil Young, whom they had met two years earlier during the early days of Buffalo Springfield. In August 1968, three months after Buffalo Springfield dissolved, Young jammed with the Rockets on stage during their show at the Whisky a Go Go and soon after enlisted Whitten, Talbot, and Molina to back him on his second solo album.


Credited to Neil Young with Crazy Horse, Everybody Knows This Is Nowhere includes the pop hit "Cinnamon Girl" and the extended guitar workouts "Down by the River" and "Cowgirl in the Sand". Crazy Horse toured with Young during the first half of 1969.


As Young spent more time with other ventures (Crosby, Stills & Nash) and gave them less of a role on his solo efforts, Crazy Horse capitalized on the exposure and recorded its eponymous debut album for Reprise Records in 1971, with  that year. The band Jack Nitzsche as producer and keyboardist, and second guitarist Nils Lofgren.


Yet a third band called the Rockets recorded an album, this band  found minor success in the burgeoning and vibrant San Francisco Bay Area club scene fronted by cocky and handsome lead singer Eddie Mahoney, rock solid drummer John Cuniberti, expressive guitarist Dan Alexander and innovative bassist Chris Solberg.
They sounded like a young Alex Chilton backed up by Free, and,  inspired by the sounds of English groups like The Move and Badfinger, they built a reputation as a great band that delivered a style unique to the Bay Area.


The group made appearances at Los Angeles's infamous Starwood Club, worked the ski resort circuit from Lake Tahoe to Sun Valley, frequented college campuses and played the occasional concert venue but never managed to move beyond that.


Off-stage the band focused on songwriting and recording. At that time, independent recording studios were starting to emerge in the Bay Area, and in 1975 The Rockets recorded tracks for a demo tape that was submitted to CBS records, which were quickly rejected, and the band dissolved soon after. 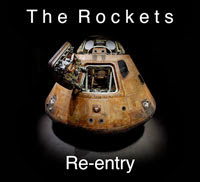 The lead singer would later change his name to Eddie Money and open a travel agency (according to the Geico commercial). Actually, Money would be signed by CBS.


To my knowledge, no recordings were issued by this band until their demos were released by Groove House (on CD) in 2010. The label has video clips HERE.
I’ve been reliving a lot of cool musical moments while I undertake this project, and felt compelled to share this one since the Detroit band had been highlighted so recently.

What have you listened to lately?